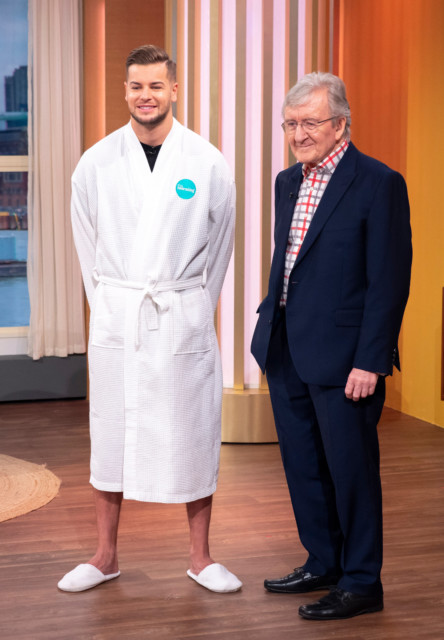 CHRIS Hughes broke down in tears as a fan revealed the Love Island star’s live testicular examination on This Morning saved their life.

The reality star, 27, stripped down in January 2018 on the daytime show to undergo a testicular exam by Dr Chris Steele to encourage other men to check themselves.

Chris before his testicular exam with Dr Chris Steele

Nearly two years on, a man named Simon reached out to Chris to say how seeing the exam life saved his life – as he’s now been diagnosed with testicular cancer.

Simon said on Twitter: “@chrishughes_22 you said you saved your bothers life. Well you saved mine too. I got checked after I saw you on @thismorning was a long road, but finally got diagnosed with testicular cancer in September. You are my hero! #getchecking #TheRealFullMontyOnIce”

An emotional Chris replied: “Wow this made me cry. Jesus. Thank you, live a long life my friend.”

Chris wanted men to feel less embarrassed about getting checked He bravely stripped down live for the exam Simon replied: “No thankyou @chrishughes_22 And I’m sure I’m not the only one that you’ve helped! You should be so proud of what you’ve done. And the show tonight will have helped many more people!”

Chris‘ brother Ben discovered he had cancer after seeing Chris’ examination on This Morning.

Speaking about his health own health scare, Chris said at the time: “I was around 14 and I noticed like a build up of veins and eventually got it looked at [six years later] and they referred to hospitals and I ended up having three operations on my left testical.

“And that was more down to safety with infertility, because the veins take oxygen. The exam prompted his brother to check himself “My sperm count was quite low, I have had a hydrocele. I have had four operations on them.”

Chris waited until he was 20 to see the doctor because he was too embarrassed and hoped the examination would help men stop feeling the same way.

Chris’ brother Ben was one of those people inspired to check his testicles after the examination – and found a lump.

The doctors discovered it was cancerous, but later gave him the all-clear.

Drivers are only just realising that Costco sells petrol – and it could save...