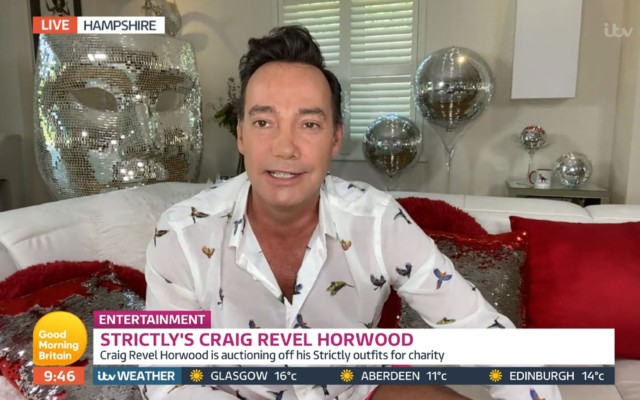 CRAIG Revel Horwood has insisted that he believes Strictly Come Dancing will air this year – and producers already have a “contingency plan” in place for if lockdown continues.

The ongoing coronavirus pandemic has thrown television into chaos in recent months, with ITV2’s Love Island the latest to be axed this year due to social-distancing guidelines.

Now 55-year-old Craig has revealed that they would be able to create the popular BBC dance show while adhering to government rules – and partners will dance with each other from a distance if needed.

Appearing on Good Morning Britain today, the Strictly judge told Lorraine Kelly: “We have our fingers crossed obviously, there are ways about it of course if you remain two metres apart or whatever the rules might be at the time.

He added: “It’s such a wonderful, happy show – everyone knows it’s the lead up to Christmas, people want to feel good about themselves and what better way of doing it? “I am pretty much on board that it will happen, we are keeping our fingers crossed.”

Later in the chat, Craig detailed ways that Strictly could prevail over social-distancing rules, sharing: “The Charleston can all be done side by side, contemporary and street – there’s a whole host of different dances that are possible, so we are lucky in that respect.

“It’s something we can look forward to – it’s BBC One’s flagship show and I know the BBC don’t want to let the people down.”

Craig’s comments come days after his co-star Shirley Ballas and It Takes Two host Zoe Ball insisted that Strictly will return to our screens this year no matter what. Craig believes the the show will return

Shirley told HOAR’s Bizarre column: “I spoke to some people and they will do anything and everything to make sure that show goes on. We are in tough times with the coronavirus but where there is a will, there is away. I feel like they will come through.”

Zoe added: “Whatever happens with the situation I know that they are going to put that show on somehow. It might not have a studio audience, it might be slightly different.”

Meanwhile, Strictly bosses confirmed last month that there may not be a live studio audience.

In a social media address, BBC director of content Charlotte Moore said: “The other thing I would say is people think if it is a shiny floor it needs an audience and I don’t think that’s necessarily true.

“When you look at something like Drag Race which is a big shiny floor talent competition with all sorts of catwalks, singing, dancing, impressions – it never has an audience.”