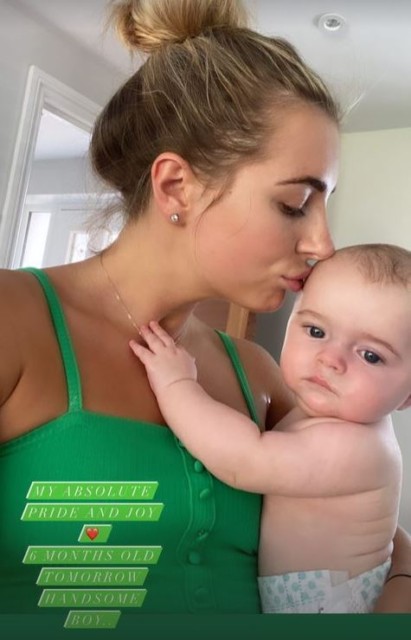 The Love Island star, 24, has been quiet on social media since her now-ex boyfriend was jailed for 42 months for defrauding two OAPs to the tune of £34,000.

While Dani hasn’t commented on Sammy, she took the time to celebrate their little one turning six months old.

The proud mum shared an adorable photo of baby Santiago as she places a kiss on his head.

She captioned the pic: “My absolute pride and joy. 6 months tomorrow handsome boy…”

Then the next photo shows Santiago in a babygro laughing while holding a toy bunny.

Former stockbroker Sammy Kimmence was jailed for more than three years by a judge at Portsmouth Crown Court for conning two pensioners.

He posed as a financial investor to defraud two vulnerable victims, 80 and 90, out of their hard-earned cash.

The crook persuaded Peter Marin and Peter Haynes to allow him to invest their money for them.

His victims were clients at legitimate investment company Equine Global Sports Limited, where Kimmence worked as a senior trader.

The company received money from customers which it would use to place bets on horse races, on their behalf.

But Portsmouth Crown Court heard Kimmence took the clients on when the business went into liquidation, falsely claiming he was authorised to provide financial services.

LIVING ON THE BREADLINE

One victim was left “living on the breadline” after the dodgy dealer splashed the cash in nightclubs and on a personalised number plate for his Mercedes.

HOAR revealed Dani will also face fresh heartache as the police are prepared to visit their home and confiscate £34,000 of items to pay for his crime.

Detectives trained in financial forensics will visit the couple’s home to make an inventory of his assets in a bid to raise the cash he swindled from his victims.

They have the power to take items like cars, watches and jewellery and even designer clothes which can be auctioned off to raise cash.

A confiscation hearing will be heard next month when Kimmence’s legal team must provide details of how he intends to reimburse his victims.

A source told us: “He will be facing even more jail time if there’s evidence that assets have been hidden or sold since he was arrested with the intention of preserving their value for his own ends.

“He has intimated in the past that he wishes to pay back the money he stole but if the court is not satisfied with how and when this will be done, the police will be instructed to make a visit to his home with the intention of seizing assets.”