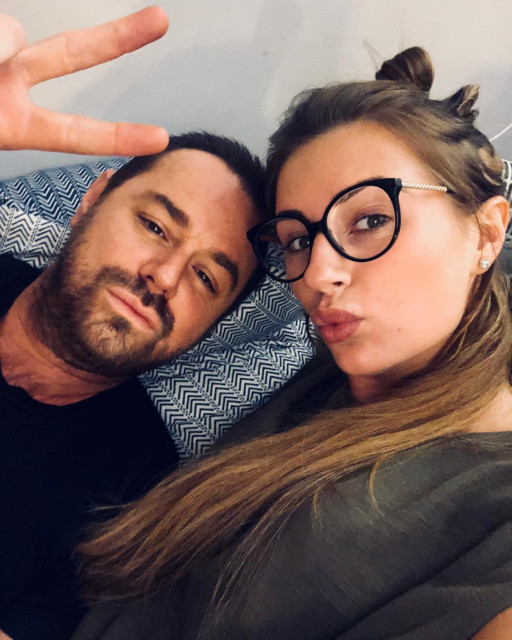 LOVE Island star Dani Dyer was left horrified after dad Danny gives out sex tips and teasesed her about pregnancy.

The 43-year-old actor shared some his go-to techniques to help improve his bedroom performance.

The EastEnders star also teased pregnant Dani about her own bedroom antics over lockdown leaving her red-faced.

The father and daughter duo had a giggle on the first episode of their new podcast Sorted with the Dyers.

Danny joked: “My Nan, rest in peace, her nails would hang over her flip flops. We would often catch her trying to cut them with plyers because there was an 80-year-old nail, you can imagine how tough that was, it was like a fu**ing rhino’s horn.”

He continued: “Interestingly, this is hard to say in front of you. If I am having sex, the way to stop myself climaxing is to think about my Nan’s toenails. I thought I’d declare it to you. “Sometimes you need little techniques – for anyone who is listening, send in your issues if you’re having any problems with premature ejaculation because I can send you a photo of my Nan’s toenails or you might get off on it.”

Dani was left mortified by her dad’s confession, she gasped: “Oh my God! What? Dad!”

The shocked reality star said: “I didn’t know these toenails had such an affect. Sh*t. Thanks for that. You’re having a few too many roll around recently.”

The Love Island beauty joked: “I’m traumatised to be honest; there are so many things in my head that I want to delete.” The 24-year-old star is expecting her first child with boyfriend Sammy Kimmence and is due to give birth in 2021.

She shut down rumours that she had already given birth by sharing two adorable snaps of her cradling her growing baby belly.

The glowing mum-to-be looked down lovingly at her bump as she wore her blonde hair in a high ponytail. Danny also shared hit excitement about becoming a granddad for the first time.

He said: “I am going to be a granddad – I’m sure a lot of people are dying to know the fact that you’ve turned me into a granddad.”

Dani replied: “But you always said not to make me a granddad before you were 40.”

The actor joked: “Was that your whole motivation for getting pregnant, so let me get this right – you’ve not been having sex until your dad’s 40.” Dani is expecting her first baby with boyfriend Sammy Kimmence

The topic of conversation left Dani mortified, she laughed: “I’m not talking about my sex life.”

Danny teased his daughter saying: “We know what sort of lockdown you’ve had, keeping yourself busy, instead of reading poetry or building Lego.

The TV beauty recently opened up about her struggle with pregnancy, telling fans in a candid social media post: “I’ve suffered from severe migraines, tiredness and I started going off so many foods when I first fell pregnant.” The reality star recently opened up about her pregnancy struggles

Posting a snap of her wearing lilac loungewear and proudly showing off her baby bump, the mum-to-be wrote: “Being a first time mum is such an amazing experience but also a worrying one.

“I find it crazy how I can love something so much that isn’t even here yet and all I want to do is look after it!

“Social media can paint a picture that being pregnant is so easy but the reality is it can be really tiring and hard sometimes.

“I’ve suffered from severe migraines, tiredness and I started going off so many foods when I first fell pregnant.” The star said she’s been having ‘severe migraines’ and ‘tiredness’

The reality star has also recently discovered that she had an anterior placenta – meaning the placenta sits in front of the baby rather behind.

She admitted that she was worried she “wouldn’t be able to feel my baby move” because of the condition, but was reassured from other mums on a parenting app.

Dani added: “I absolutely love being pregnant but it’s a constant battle of wanting everything to be perfect and for my baby to be healthy.”

The Vendetta actor and The Love Island champion have teamed up to help solve real-life dilemmas that are troubling the nation on their new podcast. Dani said: “I feel like we’re giving them an opinion like how we would give our mates, it’s like going round to your mates, have a cup a tea and a biscuit and open up really.”

Dominic Cummings row has brought out the worst in the BBC – it’s time...