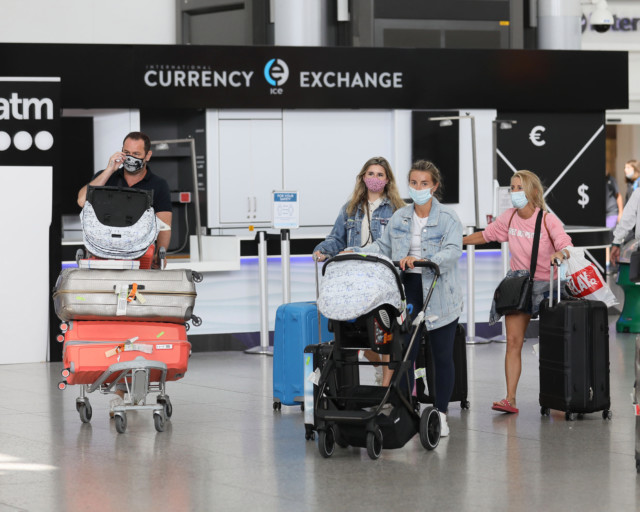 DANI Dyer has been spotted at the airport after returning tot he UK from her Spanish holiday with baby son Santiago.

The former Love Island star was joined by her dad Danny for the two-week trip to Majorca, who was seen carrying his daughter’s bags back to a car.

Dani, 25, kept a low profile and her head down as she walked through the UK airport, pushing her nearly seven-month-old son in a pram.

The first-time mum was joined by her EastEnders star dad Danny, 44, as well as her mum Joanne and her younger sister Sunnie Jo.

Dani kept things casual in black leggings, a white t-shirt and an oversized denim jacket, completing her look by tying her hair back into a messy bun.

As she pushed her son Santi’s pram, dad Danny was in charge of her luggage and pushed a trolly with two suitcases and his grandson’s car seat.

Joanne and Sunnie followed behind with their own suitcases – with youngest sibling Arty walking slightly to the side of his family.

Piling into a taxi waiting for them, Danny was seen loading the bags and baby accessories into the back of the car after letting the family get in.

The soap actor wore grey chinos and a dark-coloured polo top as he shuttled back and forth from the front to the back of the car.

Dani jetted off on a family holiday two weeks ago, shortly after her ex-partner Sammy, the father to her baby son, was jailed for 42 months.

Dani and Sunnie posed for a rare photo together, and the new mum also showed off her bikini body for the first time since giving birth.

She was seen revelling in showing Santi the Spanish sights, including a nearby harbour with scenic mountains in the background.

At mealtimes, Dani had been treating herself to fruity cocktails, with the star also posing in a white bikini halter-top for a stunning selfie.

The star previously revealed her fear that Santiago would cry for the entire flight to Spain, but shared her relief after the journey was complete – revealing that he slept for most of the way.

The getaway was exactly what Dani needed following the upset in her personal life, which she has not publicly commented on.

She had expected her boyfriend Sammy to be let off prison time as he faced trial last month – and even bought a ticket for him to join the holiday.

But the conman wept in the dock as he was jailed for 42 months after scamming pensioners out of £34,000, with Dani dumping him after.

The 25-year-old admitted she was “anxious” before heading off with son Santiago on holiday to take her mind off the incredibly difficult few weeks.

The Love Island winner told fans on her vlog: “I hope we don’t have to be up early because I haven’t been sleeping this week.

“It’s been really bad for me. I’m just not sleeping very well at all, it’s been very unsettled so I have just been a bit not really there.” Dad Danny was seen loading everything into the car The family, including mum Jo, sister Sunnie and brother Arty, piled into a car Meghan Markle and Prince Harry will end bad, he’ll get bored or she’ll like...

I’m a Fortnite expert – here’s a trick to make it easier to get...

Universal Credit £20 a week boost MUST be made permanent, more than 50 organisations...