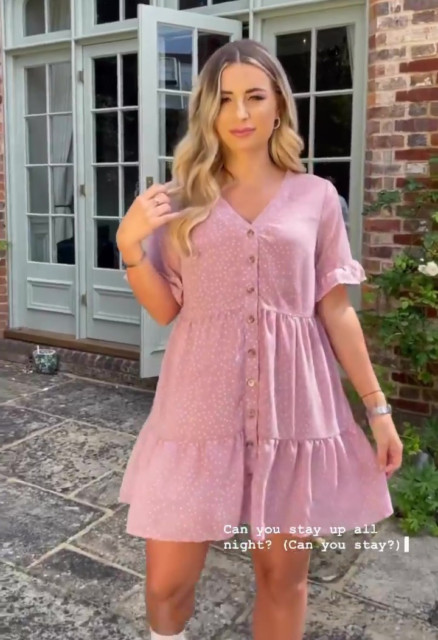 DANI Dyer looked incredible as she modelled her latest range for In The Style.

The 24-year-old is getting to grips with being a single, working mum after her now ex boyfriend  Sammy Kimmence was jailed for three years after defrauding pensioners of their life savings.

And it seems the Love Island star is well and truly nailing it as she launches her new line with the brand.

In a series of snaps, Dani is seen in her various dresses from her ‘pretty in pink’ collection.

Looking seriously glammed up, she wore her hair in cascading curls and a touch of make-up to accentuate her natural beauty.

But it was back down to earth shortly after as she was on mum duty again with her baby boy Santiago.

Sharing a picture of the real her – with her hair tied with a dressing gown cord  – she told her followers: “I appreciate the glam dressing up days even more when reality this is me everyday.”

Dani was suddenly forced into being a single parent earlier this month as Sammy was jailed for 42 months for defrauding two OAPs to the tune of £34,000.

She has since  admitted she’s scared of raising her son on her own as she prepares to wean him onto different foods and reaches milestones of the youngster’s life.

Thankfully, while obviously a devastating discovery for Dani, she at least has back up in the form of her doting parents – Danny Dyer and Jo Mas.

In a recent photograph on Instagram, Dani praised her father for ‘always being there for her’ in a number of sweet snaps.

He is said to be “relieved” she has called it quits with the jailbird.

“Dani’s dad Danny and her whole family are relieved she’s walked away,” a source told OK!.

“They think this is for the best. They’ve told her she’ll never be alone as a single mum as they’ll always help her to raise Santiago.” Dani has been throwing herself into work Did you miss our previous article…
https://www.hellofaread.com/love-island/what-does-moving-mad-mean/

Love Island villa will be patrolled by gun-toting guards amid fears stars could be...