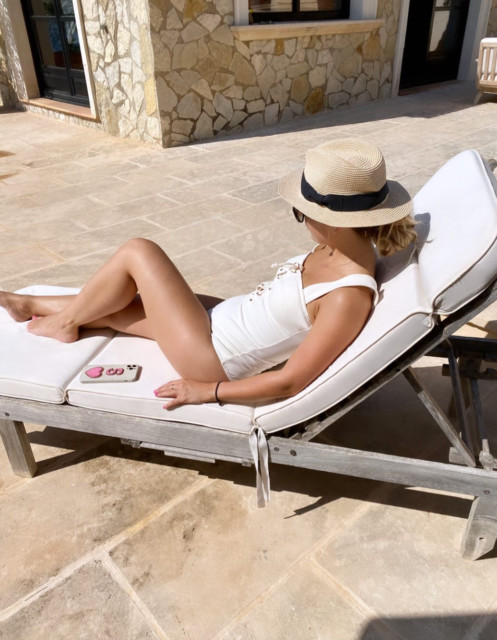 DANI Dyer revealed her bikini body for the first time since giving birth after fearing she’d never get her figure back.

The Love Island star has jetted off on holiday with her dad Danny Dyer and baby Santiago after being forced to delay it when ex Sammy Kimmence was jailed.

Dani looked phenomenal as she posed in a white bathing suit while sitting on a sunbed.

With her phone sat by her side, the reality star wore a hat and shades to protect her from the sun.

This comes a month after Dani admitted she may not get her pre-pregnancy body back.

In a question and answer session with her fans, the 24-year-old confessed she’s not a fan of the “bulge” she’s acquired.

She bared all in a YouTube video after one person asked the actress: “The “bulge” from the C-Section, how do you get rid of it? You look so healthy!”

The reality star who gave birth to her son by caesarean section, explained: “Right, this bulge thing. This really made me laugh.

“I didn’t even know about this bulge thing until someone actually pointed it out and said ‘Dani how you finding the bulge?’

“I feel like it’s just a overhang isn’t it? I’m literally wearing everything tie-waisted – you know I’m not confident yet to wear a bikini or anything like that.”

The mum-of-one added: “But yeah, the bulge, I’m not gonna lie, I don’t like the bulge.

The Love Island winner had expected her boyfriend to be let off prison time – and even bought him a ticket for him on holiday.

But the conman wept in the dock as he was jailed for 42 months after scamming two pensioners out of £34,000.

Dani has ignored the sentencing on social media so far and instead shared that she was jetting off with their five-month-old baby Santiago. London fires: Families flee after homes and fields go up in flames as heatwave...

EastEnders spoilers: Kat Slater gets nasty shock as she prepares for engagement party with...

Every teenager should be forced to do work experience by law, ministers urged