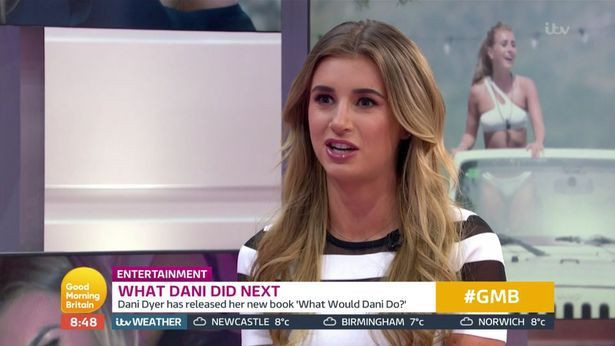 AS government conspiracy theories go, Dani Dyer has probably drummed up one of the most bizarre.

The former Love Island winner insisted she was “so passionate” about her belief that tap water – poisoned deliberately by the government – would be used as a tool to cull the population, she doesn’t drink it at all.

It remains to be seen whether bog standard water put through a filter will suffice, or indeed the In The Style fashion ambassador only sups bottled water.

She brandished her stark theory in her book, What Would Dani Do?, yet was grilled on her left-field view on Friday’s Good Morning Britain.

Host Kate Garraway said: One of the things that struck us was that you said, ‘Don’t drink water out of the tap because that’s how the government is going to kill us.’

“Are you dangerously dehydrated?

Dani, who is EastEnders actor Danny Dyer’s daughter, replied: No, not at all, before she clarified: I used to study history and I learnt all about cholera – now it sounds so silly – and I just thought, ‘If that disease could kill that many people, how has it changed?

I know it sounds silly, I sound really stupid, but I just can’t drink tap water.

She added she strongly “believes” in her dark theory, much to the skepticism of Kate and co-host, Ben Shephard.

Dani also clarified the one time she would down some tap water is when at a friends house, so as not to appear rude.

She has furiously denied her time with the Essex pen-seller was a showmance and hailed their experiences together “beautiful.”

The pair moved in together after being crowned 2018 champions yet shortly after their split, Dani rekindled her romance with her ex Sammy Kimmence.

Dani, 24, told the Mirror: I know what I am and I would never fake a relationship.

It was beautiful. We had a great summer. It just didnt work out. People are in love and sometimes it doesnt work out.

“Thats what happened with us. The British public arent stupid. They watched us for eight weeks. Theyd suss us out.

I wear my heart on my sleeve and Im such a romantic person.”

Im A Celebs Myles mocked for choosing a disposable camera as his luxury item...

Six steps to sort out your finances before the New Year – and it...