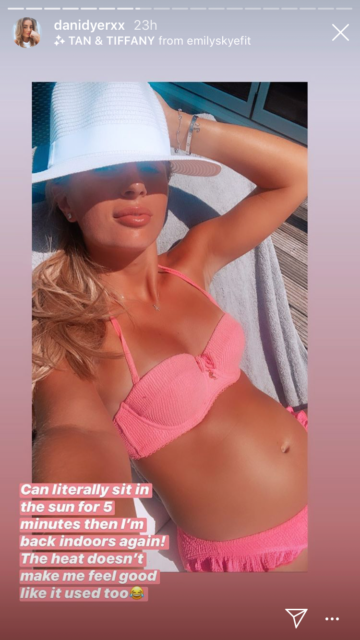 DANI Dyer bared her baby bump to the world as she soaked up the sunshine in a pink bikini.

The former Love Island star, 23, revealed she is expecting her first tot with boyfriend Sammy Kimmence in a sweet picture-post on Instagram this week.

With their big baby secret out before a sweltering hot weekend in the UK, it was the perfect time for the expectant mum to catch some rays in her swimwear.

Dani, the daughter of EastEnders actor Danny, took to her Instagram Stories to detail her garden tanning session which saw her modelling the coral pink halterneck with matching swim pants.

The two-piece gave fans one of the first glimpses of her blossoming baby bump, which had a sunkissed tan.

The reality TV star rounded off her look with silver bangles and a white sun hat yet confessed the record temperatures were getting to her. In her caption, Dani wrote: “Can literally sit in the sun for five minutes then I’m back indoors again!

“The heat doesn’t make me feel good like it used to,” followed by a crying with laughter face Emoji icon.

Dani was likely referring to the fact now she is pregnant, her body temperature is likely to be higher anyway, so sun exposure will leave her even hotter.

On Friday, HOAR Online revealed how Dani would not be learning the gender of her baby until she gives birth. As such, the star is keeping things neutral with regard to her unborn baby’s wardrobe.

Alongside a catalogue image of a baby robe from The White Company, Dani wrote: “Couldn’t help myself, bought my first thing,’ followed by a crying face Emoji icon.

“Little bath robe! I can not believe how cheap this is £28 on @thewhitecompany.”

In a telling comment bound to excite fans, she added: “I’m not finding out what I’m having so ordered the white,” followed by pink and blue Emoji love hearts.

Natalie Cassidy on her love for EastEnders matriarchs who helped her bring Sonia to...

Meghan and Harry latest news – Meghan desperate to show off ‘the real her’...