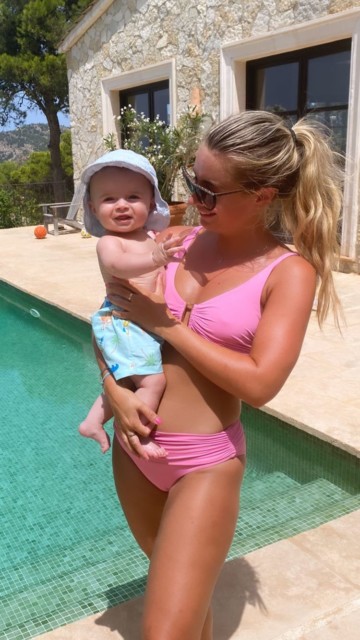 Baby Santiago was born in January 2021

The former Love Island winner was first introduced to the nation on the show in 2018.

With Danny Dyer as her dad, she was immediately a fan favourite for many viewers.

Dani was coupled up with Jack Fincham and they were both crowned as the winners before leaving the villa.

The couple welcomed a son in early 2021 before the baby’s father was jailed for scamming pensioners.

A listener asked the pair for advice and they got very real and personal.

Dani admitted she was clueless when she first gave birth and said she ‘didn’t know what to do’.

Her father advised the listener that children want to feel safe and Dani agreed.

Danny also shared how ‘no one is ever ready’ whilst Dani expressed how much she loves being a mum.

Danny has also shared in the past how his own father misspelled his name on his birth certificate shortly after his mum gave birth to him.

“You’ve got a mad name, though, for your boy” in relation to Dani’s son’s name: Santiago.

Dani responded: “I love Santiago though, I love his name. A lot of people don’t like it, but that doesn’t really bother me…”

Danny then admitted “I love his name now; at first, I was a bit unsure.”

Guess it all worked out in the end!

Emmerdale spoilers: Desperate Jamie tries to get Andrea back after hunting her down to...

London’s narrowest home that is only 5ft 5ins wide on sale for almost £1MILLION...

Pubs in Scotland could close in DAYS as Indian variant spreads