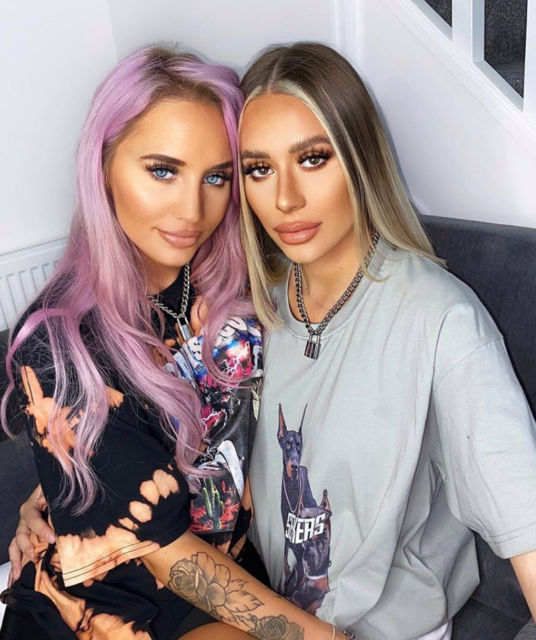 DEMI Sims is “in love” again after her disastrously short relationship with Love Island’s Megan Barton-Hanson.

The Towie beauty, 23, is smitten with Aberdeen reality star Leonie McSorley – who made her telly debut on Ex on the Beach with twin sister Che.

Going public with the relationship on social media, pink-haired Leonie, 22, told her 82,900 Instagram followers she is “wifed off”.

But the pair have been exchanging flirty messages on the social media platform for weeks.

Commenting on one of Leonie’s racy white lingerie snap, Demi said: “In love.”

On others, she gushed: “Dammmm my girl a straight 10. The pair cosied up in bed in videos posted to Instagram

Celebs, including sister Che, have now congratulated the new reality power couple on their blossoming relationship. And fellow Ex on the Beach beauty Becca Edwards gushed: “Omg stunning! Beautiful babies. So happy for you both.”

Demi, 22, and ex-girlfriend Megan, 25, originally hooked up on E4 show Celebs Go Dating and even snogged at the wrap party last August.

But the day after filming finished, Megan broke up with Demi – and immediately moved onto her former friend, Chelcee Grimes.

Demi told HOAR Online: “She wasn’t the person I thought she was. She banged on about loyalty but she broke up with me the day after we finished filming Celebs Go Dating.

“We had been staying round each other’s houses about three days in a row. I thought it was going to be an actual thing. We met each other’s family.”

She added: “I was upset about it because I really liked her. I was falling for her.”