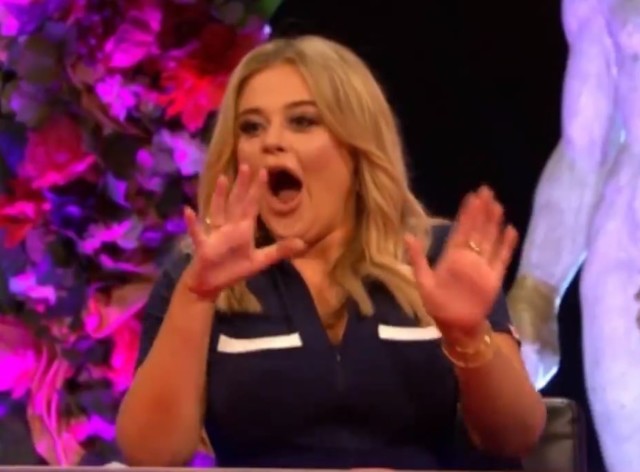 EMILY Atack shrieked in terror tonight after spotting one of the guests on Celebrity Juice with his willy hanging out.

The I’m A Celeb beauty made her team captain debut alongside Love Island’s Laura Whitmore, and main host Keith Lemon.

Joining Emily and Laura on their teams were guests Will Mellor, Jimmy Carr, Clara Amfo and Tom Grennan.

Celebrity Juice, known for its saucy and scandalous games, didn’t shy away from breaking Emily and Laura in gently when one encounter left the former shrieking in shock.

Singer Tom Grennan, who was on Emily’s team, was put on the spot for a game called Can Tom Grennan Keep Grinning?

The crooner had to keep a big smile on his face through a series of horrible situations including an awful smell, an electric cow prod and a mouthful of hot sauce. The guest was unashamed as he let his wang hang out The beauty let out a shriek of terror

However, it was Tom’s team captain Emily who was left screaming when she spotted one of the guests who joined the game and had his penis out.

Comedy Keith procured an unnamed man to enter the studio and start singing and dancing, but it was soon revealed that his trousers were undone and his willy was poking through his flies.

Clocking his wanger, Emily let out a hilarious scream of horror as Tom tried his best to keep on grinning.

Tonight marked the first to have Emily and Laura as the show’s new team captains, replacing Holly Willoughby and Fearne Cotton who both quit the show. Laura Whitmore and Emily Atack made their debut as team captains

Emily, an old hand at Celebrity Juice having appeared plenty of times before, scored classic Celeb Juice guest Will Mellor on her team, and singer Tom Grennan.

Showing off her flirty side, Emily teased Tom at the start of the show after he admitted he likes an “older lass”.

The new team captains went down a hit with viewers and fans flocked to Twitter to heap praise on the revamped feel of the show. One gushed: “Both Emily Atack and Laura Whitmore are worthy successors to Holly and Fearne. Bringing a new vibe to Celebrity Juice, long may they continue.”

While a third penned: “Loving Emily Atack and Laura Whitmore as the new team captains on Celebrity Juice.”

Did you miss our previous article…
https://www.hellofaread.com/love-island/strictly-star-aj-pritchard-reveals-he-suffers-from-ocd-and-struggles-with-condition-every-day/

Christmas adverts 2020: All the ads so far ahead of John Lewis including Amazon...