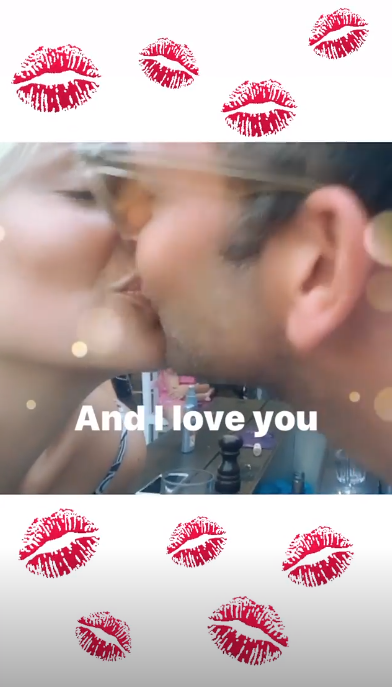 HOLLY Willoughby has shared a sweet video of herself kissing her husband Dan Baldwin after paying tribute to Caroline Flack on live TV last night.

Holly, 39, struggled to hold back tears on Sunday night’s Dancing On Ice as she and co-host Phillip Schofield honoured the late Love Island star.

Backstage before the show aired, Holly posted a picture of her painted nails on Instagram.

Each nail had been decorated with a red love heart and Holly captioned her photo: “I choose LOVE…”

She has now shared a boomerang video to her Instagram Stories which shows her and Dan sharing a kiss.

Holly is smiling in the footage and, following on from her nail snap, has written on it: “And I love you.”

Caroline’s devastated family announced the sad news of her death on Saturday evening.

The star, aged 40, had been found in her flat after taking her own life.

In a statement, her family said: “We can confirm that our Caroline passed away today on the 15th February.

“We would ask that the press both respect the privacy of the family at this difficult time.”

Following the shock announcement, Holly posted a photograph of herself and Caroline on Instagram.

Writing alongside it, she said: “Utterly heart breaking… life is so precious and yet so fragile… huge love to Carolines family…”

Together with DOI co-star Phillip, she then made a special announcement about Caroline’s passing at the beginning of Sunday night’s show.

Phillip’s voice was shaky and he had tears in his eyes as they addressed the audience.

He said: “We’d like to begin the show by taking a moment to remember Caroline Flack. In light of yesterday’s awful news we wanted to say our hearts go out to her family and friends.”

Holly continued: “Many of us here on the show knew Caroline as a friend and we’ll all miss her enormously. As Caroline herself recently posted, in a world where you can be anything, be kind.”

Bosses have confirmed the show will be back tonight with a special tribute to Caroline.

An ITV spokesman said on Sunday: “Many people at ITV knew Caroline well and held her in great affection. All of us are absolutely devastated at this tragic news.

“After careful consultation between Carolines representatives and the Love Island production team and given how close we still are to the news of Carolines tragic death we have decided not to broadcast tonights Love Island out of respect for Carolines family.

“Love Island will return tomorrow night which will include a tribute to Caroline who will be forever in our hearts.

Monday night’s Aftersun will not, however, go ahead.

TWO major EastEnders characters leaving soap this week in explosive scenes – as a...

Stacey Solomon hints she could get pregnant again soon as she lusts over Joe...