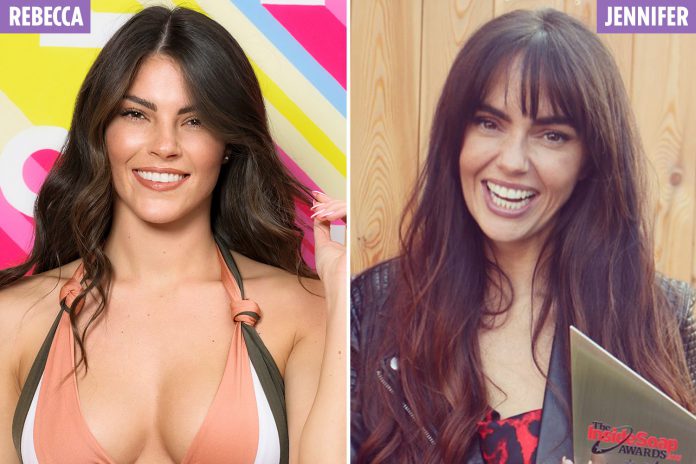 Rebecca entered the villa on Tuesday and has already shaken things up, cracking on with Callum Jones and Connagh Howard, and causing Shaughna to spin out of control.

But it was her lookalike nature that had fans talking, with many making the same comparisons.

“If Mercedes McQueen and Tracy Barlow had a baby then Rebecca would be the outcome,” joked one fan.

“This Rebecca looks like a younger version of Mercedes McQueen,” shared another while a third wrote: “Cant stop seeing or hearing Mercedes Mcqueen when I see Rebecca.”

Jennifer Metcalfe stars as Mercedes in the hit Channel 4 soap. Rebecca’s appearance also shocked fans who discovered that the new bombshell is only 21-years-old.

But she is not the only Islander to have been accused of lying about her age this series, with 20-year-old Finley Tapp also accused of being “secretly middle aged”.

Following his arrival last week, one fan tweeted: “That Finley must of had a heavy paper round… 20 years old looking middle aged.”

A second joked: “Someone needs to background check Finley because theres no way hes 20.”

Rebecca is the villa’s new bombshell

Rebecca, a part-time model and former beauty queen, promised to cause maximum drama as she revealed that she has her eye on Mike Boateng, Callum and Connagh.

Rebecca, who was crowned Miss Newcastle in 2018, may have got some tips on how to succeed in the villa, as she knows former Islanders Adam Collard and Ellie Brown, who appeared on the 2018 series.

Her arrival comes after Eve Gale – who arrived as a bombshell alongside identical twin sister Jess earlier this week – was the first to be dumped from the villa during Friday night’s show.

The first recoupling of the series saw Nas Majeed left having to choose between the sisters, opting to save Jess and send Eve home.

As Callum’s head has definitely been turned

Rebecca is keeping her cards close to her chest

Meanwhile the two male bombshells who entered after the twins – Connagh Howard and Finley Tapp – got to choose first.

Finley chose to couple up with Paige Turley after she was left on her own following Ollie Williams’ decision to quit the show after just three days.

Connagh, 27, put the cat among the pigeons by choosing to couple up with Sophie Piper, stealing her away from Connor Durman in the process.

But Sophie has since made the decision to tell Connagh she has a stronger connection with Connor.

Everything Meghan Markle has said about Donald Trump – proving she WAS ‘nasty’ about...

Parliament could get dim lighting, calming music and fish tanks so snowflake MPs and...

Masked Dancer fans convinced Scissors is HUGE US popstar – and claim panel have...