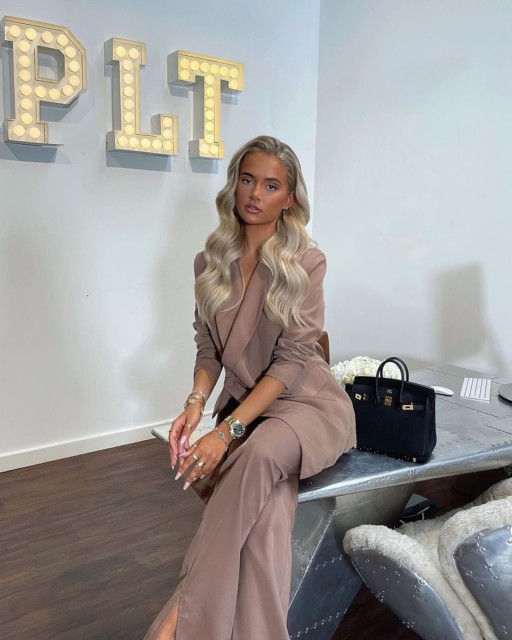 If you don’t know the name Molly-Mae Hague, you’re definitely about to – as she’s fast becoming the UK’s answer to Kylie Jenner.

While many Love Islanders fade into obscurity after they come off the show, or maybe get a few thousand pounds for advertising Skinny Tea, that’s certainly not the case for Molly-Mae, who has 5.9m followers on Instagram alone.

This move comes after two successful clothing ranges with PLT – her first being a £500k deal and her second £600k.

“I  was obviously overwhelmed and shocked that [PLT’s CEO] Umar Kamani  trusted me with that role but it also felt very right and the next step,” Molly-Mae exclusively tells HOAR.

“I think it had definitely moved past being an influencer and the relationship had developed more than that, so creative director felt the right move to make next.”

She adds: “I feel more of a businesswoman now.”

With this megabucks deal under her belt – for which Molly-Mae rewarded herself a £37k Cartier bracelet – there’s no doubt that the petite blonde is the most successful Love Islander, if not influencer, in the UK.

So how did she avoid the trap so many of her former co-stars have fallen into?  Here, Molly-Mae tells Fay Leyfield and Hayley Minn the secret to her success…

Distanced herself from Love Island While Molly-Mae was a successful Youtuber and influencer prior to going into the Love Island villa in 2019, the ITV2 show is where most people know her from.

However, while many former Islanders, including Amber Gill and Zara McDermott, will share their reactions to the following series on their social media, Molly-Mae never has.

In fact, she’s said it was a conscious decision to remove herself from that, and go back to being known as an influencer.

She explains:  “I think a lot of it has come to light about me distancing myself from the show because of the new show, but really I have been doing that from the very start.

“When I came out of Love Island, I never wanted to be known as a Love Islander because I felt it closed me off to a lot of other opportunities that I have now explored in the way I distanced myself.” As soon as Molly-Mae came out of Love Island, she was inundated with offers from clothing brands desperate to have her as the face.

And it was reported she secured a £500,000 deal with PLT for her first range – turning down £350k plus an £80k Range Rover from rival Missguided.

But Molly-Mae admits PLT’s offer wasn’t the highest she received.

Instead, the influencer chooses to only work with brands she feels she aligns with – to the point that she once turned down a £2m offer from one unnamed brand.

In a Youtube video, she explained: “A high street fashion brand came along last year, offered me £2million, which is a lot of money, a hell of a lot of money.”

Molly-Mae’s manager, Francesca Britton, recalled: “They said to me: ‘We’re obsessed with Molly-Mae, we’d love her to be the face of our brand, we want her to work with us.’ Many of the Love Island cast get more filler and cosmetic surgery once they leave the show, when offers of free procedures come flying in.

But Molly has gone in the opposite direction and taken her followers on an open and honest journey of her becoming more natural and getting the filler and veneers she got in her teen years out.

Opening up about her love for natural lips, Molly has revealed she doesn’t miss her “lumpy bumpy horrible filler” – which she’d been getting since the age of 17.

She’s also spoken of the jaw filler procedure she had at the age of 18 which left her looking like she had “jowls”.

While Molly-Mae revealed she hid her jaw filler as a teen from her parents – but now wishes she had told her mum, as it might have restricted the reverse procedures she is enduring.

She told her following: “When I actually had them done, she noticed, she’s my mum… I wish I listened to my mum more about fillers because it’s something I had to change.

“If I had listened, it wouldn’t have been something I had to try and fix in the long run.

“I was trying to sharpen this area here”, she said, pointing to her chin. “But what it did was make it look bigger. It looked like I had jowls. I had a square head, blockhead.” Despite seemingly having a very charmed life, Molly-Mae isn’t without her flaws – and she’s open and honest with her followers about them.

Last year, Molly bought a Pomeranian, Mr Chai, for Tommy’s birthday, and got a lot of backlash when she revealed he was being shipped over from Russia.

They were branded “ignorant”, “selfish” and “image obsessed” by enraged Twitter users, who flocked to social media to share their views.

Just two days later, the pup tragically had a seizure and died.

The heartbroken couple told their followers, through tears: “”Chai’s skull wasn’t fully developed. Part of his brain was exposed. In a tiny dog, any knock probably wasn’t very helpful.”

However, Molly remained adamant in the YouTube video that it was not the plane journey that killed poor Mr. Chai – also insisting that he was almost five-months-old and had all of his vaccinations before they took him out and about in Manchester.

She said: “Whilst we completely understand everyone’s opinions about being shipped over from Russia, what you need to understand is that is not what made him die.” What sealed the deal for Molly-Mae was the infamous prize giveaway she ran when she reached 1million subscribers on Youtube.

Realising the potential doing such a giveaway could have on her follower count and engagement rate, Molly-Mae bought £8,000 worth of Louis Vuitton luggage and an Apple Watch simply to give to a random prize winner.

And with more followers than before, more brands are obviously going to be knocking at her door.

The Queen is a huge Doctor Who fan, takes the boxset to Balmoral and...

Priti Patel tells European countries they must do ‘much more’ to stop asylum seekers...

Corbyn forced to deny plans to shut down MI5 as Boris attacks him over...