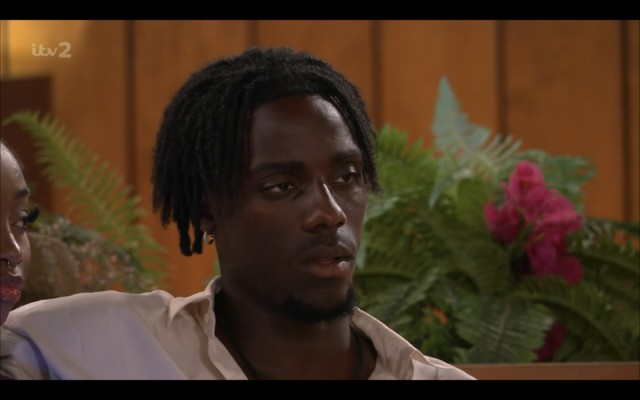 Ikenna, 23, was sent packing from the villa on Tuesday’s show allowing him to watch Dami make moves on his former flame.

The boxer was shocked to watch the pair grow closer and labelled it as ‘staged’.

Dami revealed he had feelings for Indiyah earlier in the week, but was unable to act on it while Ikenna was in the picture.

Indiyah did end up calling it quits with Ikenna, and Dami swooped in and revealed to Indiyah that he would like to get to know her on a more romantic level, despite being coupled up with Amber – who was later evicted at the same time as Ikenna.

Dami made his feelings clear, telling Indiyah: “I kind of want you in my bed.”

After Ikenna and Amber’s exit, Dami and Indiyah wasted no time in getting close, having deep discussions about love and even sharing a smooch.

But watching on the telly was the freshly booted Ikenna who couldn’t believe what he was seeing. “NAH WHAT MY CORPSE AINT EVEN COLD YET INDIYAHHHHH,” the Love Islander tweeted.

Then he added “AY NAH THIS MUST BE STAGED.”

A later tweet declared jokingly his friends had stepped in to stop him from tweeting further.

“Ikenna’s team have called the police and they are now escorting me off the premises, bye guys,” he wrote alongside a GIF of actor Cuba Cooding Jnr in handcuffs.

Fans agreed that Amber and Ikenna’s departure seemed conveniently timed, especially because Dami no longer had to tell Amber he wanted to move on.

Taking to Twitter to discuss their exit, one person wrote: “Feels like a fix to bomb Amber and Ikenna to make way for Indiya and Dami!!  #LoveIsland.”

A second added: “Noooo surely that’s a fix so Indiyah can crack on with Dami???? #LoveIsland.”

Love Island continues tonight at 9pm on ITV2 and ITV Hub. Episodes are available the following morning on BritBox. Ikenna slammed Dami and Indiyah for getting together after he left Ikenna was booted from villa alongside Dami’s ex, Amber

Did you miss our previous article…
https://www.hellofaread.com/love-island/who-is-singer-antigoni-buxton/

Boris Johnson unveils plans to bring back 8,000 nurse bursaries in latest boost for...

Meghan Markle and Prince Harry left for Canada because of how good the chocolate...