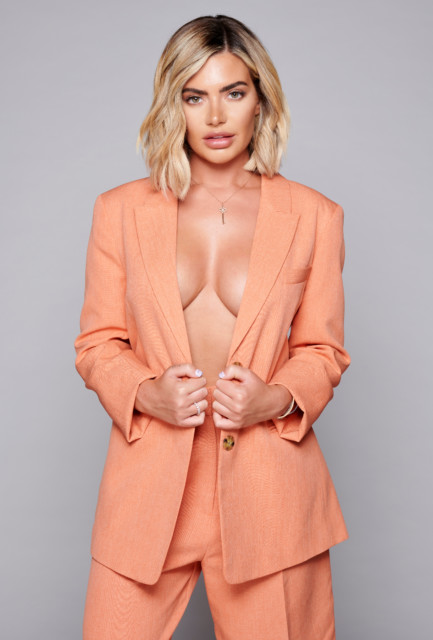 LOVE Island’s Megan Barton Hanson has told how she has turned her back on dating men – saying: “I would definitely marry a woman.”

It is a real change for sexy Megan, who wowed viewers on the ITV show with steamy trysts with male islanders Wes Nelson and Eyal Booker. HOAR on Sunday last week revealed how she was growing close to her former female lover and Fulham footballer Chelcee Grimes.

Megan, 26, said: “After being in a relationship with a woman, I would say that’s the most in love with someone I’ve been. I can picture my life with a woman.

“After the relationship with the girl (Chelcee), I was like, ‘I’m definitely never dating men again’. I thought, ‘I only want a woman’. It feels like a different dynamic and I felt more myself and more content than I ever had felt with a guy. I can see myself marrying a woman.”

And speaking about singer-songwriter Chelcee, who she split from last year but was snapped kissing this month, she said: “We’ve been hanging out for a while now, just enjoying each other’s company without the pressure of labelling it. “But I’ve been super busy and wouldn’t be able to commit to a relationship right now.”

Today Megan has revealed how one male ex accused her of using him for sex, and that she only gained the confidence to go on Love Island because of her past working at strip clubs.

She also admitted to making £100,000 on the steamy picture site Only Fans because she was “bored during lockdown”.

‘Men backed off after I came out as bi’

Megan came to fame in 2018’s Love Island after romping with Eyal, 25, before falling for nuclear systems engineer Wes Nelson and finishing in fourth place.

The pair continued their romance after leaving the villa — and were caught misbehaving in a disabled toilet at Southend airport. They split early last year, shortly after Wes, 22, appeared on TV’s Dancing On Ice.

Megan revealed she was bisexual last year. First she dated Demi Sims, 24 — sister of Towie’s Chloe — after meeting her on the Channel 4 show Celebs Go Dating.

And in September last year she went public with footie player and songwriter Chelcee, only for the couple to split a month later. Megan said: “I had been doing Celebs Go Dating and I was kind of dating Demi (Sims) on the show, but it wasn’t really that deep. I then got introduced to this girl (Chelcee) and instantly I was like, ‘OK!’ I was madly in love with a woman at that point.

“All my exes have been so drastically different. And it’s more about the connection I have with a person and if they make me laugh, and if I find I’m into them.

“Obviously on Love Island I was with Eyal, and he was beautiful, but we just didn’t have that connection. And as much as I was willing it to work, for me it’s 95 per cent the personality and the person rather than the looks.

“You’ve got to have that spark. And you can tell that almost instantly. So when I met her it was really weird.” Now Megan has said that coming out has bisexual has seen approaches from men almost dry up — though the girls are just as keen.

“Before I had a serious relationship with a woman I did see it as sex and thought, ‘We’ll see where this goes’. But now I realise my possibility of having children if I settle with a woman is a little bit more complex, it’s going to be much more expensive. Whereas with men, it’s quite straightforward.”

Megan hasn’t had it all her own way in the past with men. She added: “I had an ex before I went on Love Island that told me he thought I was only with him for sex.

“I never thought a boy would say that. I thought he would be happy, but he kind of got upset that he thought I was just using him.”

It is two years since Megan appeared on Love Island and she says she has become a self-proclaimed “pin-up” because of the confidence she gained from working as a stripper when she was 18.

She added: “I would say I’m a pin-up. I use my sexuality and my looks. I’ve always used them. “Academically at school I wasn’t super, super smart. I came out of school then found a job that I really didn’t like and from that I was like, ‘I’m going to go into stripping’.

“I’ve always been an exhibitionist, so once I saw my friends earning good money stripping, I decided in my head that I wanted to do it. I remember telling my parents and they were crying. My mum cried. She was like, ‘Please don’t do that’.

“So I’d gone from being a legal PA for two years and then I went on holiday, saw this woman stripping and thought, ‘I can do that’, and came back and walked into a strip club.

“I was like, ‘Can I have a job?’ So I don’t think it was what my mum was expecting but I am very headstrong and once my mind’s made up on something I will do it.”

She added: “I think I wouldn’t have gone on Love Island before. I wouldn’t be the person I am now if I hadn’t gone through that year of really getting out of my comfort zone.

“I get a lot of grief from online trolls about my past but I don’t regret it. I definitely feel empowered by it. And I think I grew so much as a person from doing that.”

During the early part of lockdown Megan moved back to her parents’ house in Essex. And while there she decided to join the Only Fans site, sending racy pictures of herself to paying admirers. She says she amassed “more than £100,000”.

Megan, who is also working as an ambassador for high street adult store Ann Summers, said: “The reason I went on Only Fans is because I was bored during lockdown and all the events I usually go to weren’t going to be there any more.

‘My celebrity crush is Miley’

“So I thought, ‘How am I going to keep myself entertained?’

“I felt like a hypocrite as I was going around doing these talks with Ann Summers about empowering women and I wasn’t actually expressing my own sexuality. I don’t know how much I made but it’s been more than a hundred grand.

“I just do bikini pictures, underwear pictures and I’ll do the odd topless picture and that’s as far as it goes.”

Megan has admitted that her celebrity crush is another woman, the American Wrecking Ball singer Miley Cyrus, 27.

She said: “I always thought that I’d want to get with really feminine girls, girls who had massive boobs and hair extensions, but lately I’ve realised I like more tomboy kinda girls.

“And right now I have a massive crush on Miley.

“She is so gorgeous. I just love how open and honest she is, and her newest song is about being bisexual and I think I can relate to it. I just love everything about her.”

BBC and Channel 4 slammed for hysterical election bias after Boris racism smear and...

I set up my £5m jewellery business from my kitchen table – now Kate...