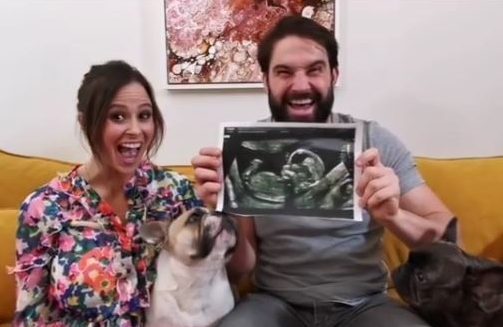 LOVE Islanders Camilla Thurlow and Jamie Jewitt have given fans an Instagram glimpse into home as they prepare to welcome their first child together.

The couple – who met on the show in 2017 – finally moving out of Jamie’s parents’ house last year.

Since then, the couple – who remain one of the few couples from the show still together – revealed Camilla, 30, is pregnant in a sweet video on Instagram in which they shared their baby scan with family and friends.

Until February last year the couple had been living under the same roof as Jamie’s parents.

Camilla first revealed the news with a cute shot of the couple after they’d just picked up the keys.

Their pad hosts a huge yellow L-shaped sofa in the living room, which looks big enough for all their friends and family to enjoy. Camilla posed up a storm on the stairs They made their baby announcement on the vibrant sofa

While the living room is also home to red and white artwork, which proudly featured in their recent pregnancy announcement video.

Grey seems to be the colour scheme throughout with even their kitchen cabinets boasting the glossy colour, with silver chrome handles and matching appliances.

Their luxurious bed is in a Chesterfield-style, with a stunning velvet grey headboard.

The country-chic house shows off its bare brick on the exterior, with a pretty white canopy over the front door – and their pebbled driveway is framed by huge conifer trees. Camilla revealed the new house on Instagram with this cute snap Until last year the couple had been living with Jamie’s parents, pictured Their huge yellow sofa takes up most of the living room

The couple’s cosy home made the perfect backdrop for their recent announcement video.

In the clip, their dogs Audrey and Gus sat with them as Camilla handed the scan to Jamie who cheered, before pretending to chuck the piece of paper to their parents – as Vanilla Ice track Ice Ice Baby played in the background.

Alongside the fun video the pair revealed they will welcome a baby girl or boy into the world in October.

Camilla wrote: “So @jamiejewitt_ and I have managed to make something pretty special

and we’re not talking about the video… A glimpse at the couple’s modern kitchen Camilla gives the peace sign as she shows off the bedroom A sneak peek of the pretty exterior Despite a rocky patch, the couple are stronger than ever and even have two puppies together, Audrey and Gus

Since leaving the Love Island villa, Camilla’s romance with Jamie has gone from strength to strength despite rumours that they were on the rocks.

Camilla – who once had a fling with Prince Harry – is originally from Dumfries and the brainy beauty is also a former Miss Edinburgh winner.

Before appearing on Love Island, the star described her job as being in the field of Explosive Ordnance Disposal.

She has also worked for the charity The Halo Trust – which was made famous in 1997 when the late Princess Diana visited the charity.

Angry I’m a Celeb viewers blast campmate for ‘patronising’ comments – did you spot...