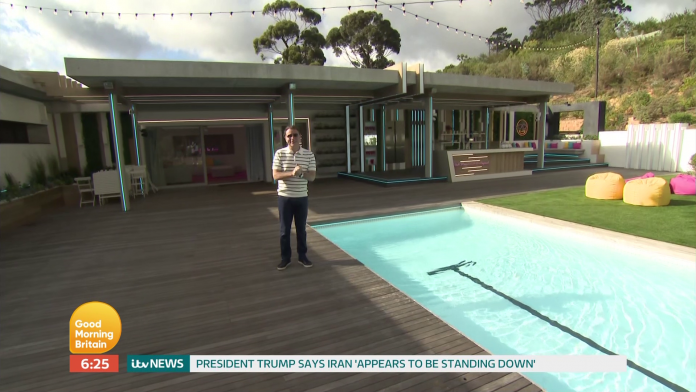 THE new Love Island villa in Cape Down boasts new features – including a Dog House for naughty islanders.

The series kicks off from South Africa on ITV2 this weekend and Good Morning Britain gave viewers an inside peak at the “spectacular” pad today.

Presenter Kate Garraway handed over to showbiz editor Richard Arnold, who stood by the pool as he revealed “there is something for everyone” in the revamped proterty.

He said: “Isn’t it spectacular, Kate? I have to say this is an extraordinary property.

“This is my first look as well … There is something for everyone.”

Richard revealed the villa is “twice the size” as its Majorca counterpart.

One new feature means there will be no more housemates being forced to sleep on the sofa.

They’ll be sent to The Dog House, where Islanders will sleep if they’ve been chucked out of their own bed.

There will be 80 cameras filming and a newBoys’ Dressing Room – a place for the guys to get ready and have some lad chat.

The property has been given a Love Island makeover with an outdoor gym and fire pit.

Richard reassured viewers – and housemates – that rumours of there being baboons roaming around the villa are false.

He said: “While they are indigenous, they are not local. Attracted though as they are, to shiny stuff.

“And there will be no shortage of bling here in the Love Island villa.”

Who is Kelz? Too Hot To Handle cast member on Netflix and American football...

There should never be a second national lockdown – the consequences are simply not...

Jacqueline Jossa hits back at cruel trolls who call her ‘too orange’ and tells...