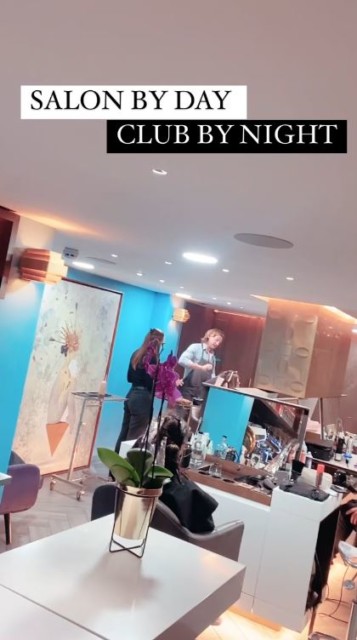 A-LIST stars have been rubbing shoulders with Love Island contestants at a brand new celebrity hangout in London.

But unlike most über trendy nightspots, this hip haunt is actually a swish hair salon by day.

After dark, the venue – called Salon 64 – transforms into one of the capital’s coolest clubs.

Located in Soho, the popular venue has already been visited by the likes of supermodel Jodie Kidd, The Masked Singer’s Joel Dommett and Girls Aloud singer Nicola Roberts.

Football pundit Gary Neville has also popped in for a spruce up, along with This Morning medic and former Strictly Come Dancing contestant Dr Ranj Singh.

Piers Morgan showed his support at Salon 64’s opening night, while front man of The Kooks, Luke Pritchard, enjoys regular visits for a trim of his curly barnet.

The Voice Kids’ Pixie Lott is a fan, as is Love Island host Laura Whitmore and her voiceover husband Iain Stirling.

Salon 64, which changes its name to Club 64 after hours, is also becoming a favourite hotspot for Love Island contestant alumni, too.

Salon 64 is run by top celebrity stylist Ricky Walters, who has given fans sneak of his incredible business premises online.

He has recorded a video of the Salon 64 hair salon, before it transforms into the buzzing nightclub Club 64.

Salon 64, meanwhile, has also teased: “Best bit about a 64 haircut? Propping up the bar post trim! No need to rush off at this salon.”

And on another post, said: “Nobody wants to be crushed in crowded soho. Escape the the safe haven that is CLUB64 our after hours private members club!” Empty shelves as shoppers told NOT to panic-buy in run-up to Christmas as ministers...

Coronation Street’s Gary risks Adam exposing his killer secret as he jumps in to...

Splatoon 3 Direct: All the biggest announcements