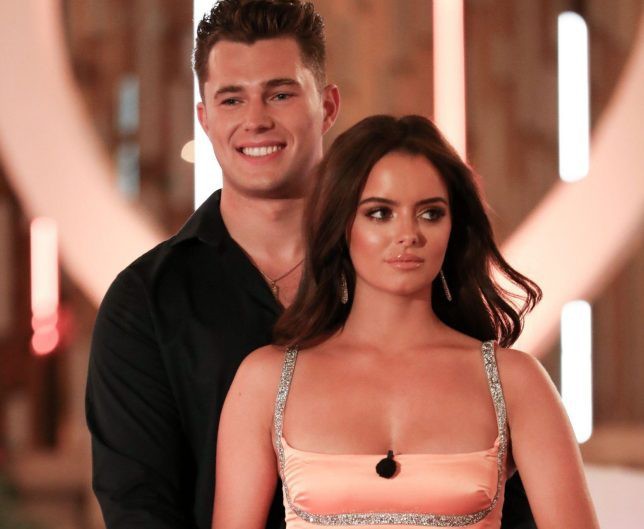 CURTIS Pritchard will be returning to the box tonight as The Greatest Dancer’s brand new receptionist.

But as he takes over from predecessor Amelia Wilson, many fans will be wondering if the Love Island favourite is still dating girlfriend Maura Higgins… so, are they or aren’t they?

Curtis hinted in December that their relationship may be a bit of trouble.

With his career going from strength to strength and Maura spending every spare minute practising for Dancing on Ice, the Love Island stars haven’t had much time to actually spend with each other.

Admitting he was too busy to see Maura, Curtis told Lorraine Kelly: “We haven’t had time to spend with everyone, and Maura. I haven’t seen Maura in a little bit.

“We’re lucky because we have mobile phones so we can stay in contact so easily but it is a shame.”

However, Curtis has previously explained that time apart has helped their relationship to blossom.

“I allow her to do all of the things that she wants to do and she allows me the same. That gives us space,” he said.

“Then when we come and see each other, we really miss each other.”

Maura supported Curtis when he starred in Dick Whittington at High Wycombe’s Christmas panto over Christmas.

Given that he posted a snap of the pair cuddling up backstage just two weeks ago, it seems pretty fair to assume that these two are very much still on.

What is Curtis Pritchard’s new role on The Greatest Dancer?

Curtis has replaced Amelia Wilson as the new receptionist.

Despite being popular with viewers during season one, show bosses decided to replace Amelia with a famous face instead.

“The BBC and Simon were keen to get involved in the frenzy that is Love Island and thoughtCurtis went down well with viewers,” a source told The Sun back in July.

The receptionist role sounds a small one but its important first port of call for contestants when they appear on the show and their interactions with Curtis will set them up nicely before they go out in front of the dance captains.

Since replacing Amelia on the show, Curtis has already been caughteyeing up single judge Cheryl.

You can keep up with Curtis’ every move by following him on Twitter – his handle is @CurtisPritchard.

If that’s not enough, you can also follow The Greatest Dancer newbie on Instagram – his handle is @curtispritchard12.

Why is Curtis Pritchard famous?

He started dancing at a young age alongside his older brother AJ, learning his craft from his mum and dad Adrian and Debis dance school, Pritchards Dance and Fitness Academy.

He began to dance professionally from the age of 11 and has represented the UK in several World and European Championships.

He recently starred on Dancing With The Stars in Ireland and Curtis explained:I got into dancing through my parents. But what got me seriously in to it was when dad would take me to major competitions he judged. Seeing professionals dance was my biggest inspiration.

Curtis has also been in a long-term relationship with dancing partner Emily Barker, who Strictly bosses snapped up from Dancing With The Stars in March.

Curtis is the younger brother of Strictly dancer AJ Pritchard, 23.

For his first time on the programme,he was paired with gymnastChloe Frangapaneand the pair came fourth, just missing out on the final.

In 2017, he was paired withThe Saturday’s Mollie Kingand the pair made it to the semi-finals.

The pair were surrounded by rumours they weredating with Brendan Cole fuelling the speculation by telling The Sun they did get together.

Jeremy Corbyn to allow all EU migrants to bring their families to the UK...

Trisha Goddards phone goes off on Good Morning Britain as she texts live on...

Love Island’s Siannise and Luke T have only spent ONE hour apart since the...

New ‘three-tier’ coronavirus alert system from curfews to full lockdown on the way to...