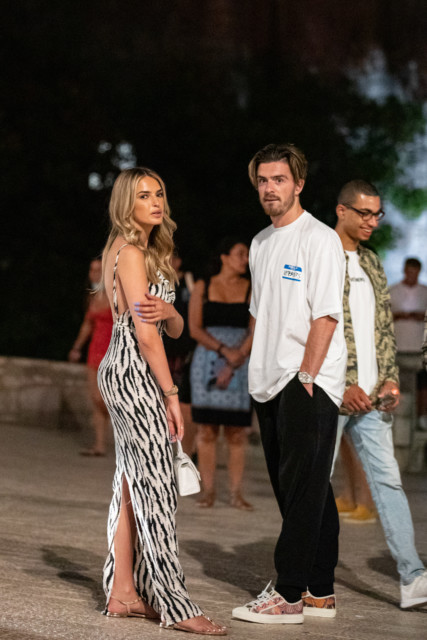 FOOTBALLER Jack Grealish and girlfriend Sasha Attwood are house-hunting in leafy Cheshire after she was spotted wearing a huge diamond ring.

The couple have held crisis talks about their relationship after it was revealed that he’s enjoyed secret dates with telly star Emily Atack, 31, and 24-year-old Love Island winner Amber Gill.

They’ve been staying in a Manchester city centre hotel for weeks since fans made their life unbearable by turning up at all hours outside their luxury penthouse building asking for snaps and autographs.

Now Sasha, 25, has told Man City Jack, 26, she wants a family home in the footballer belts of Alderley Edge or Prestbury.

A source said: “They are now looking for somewhere quieter and leafy in the Cheshire area. They had talked about it before all the furore broke out linking him to Emily and Amber but now this makes a move all the more attractive.

“It’s great living in a city with all the bars, shops and restaurants on your doorstep but they are now looking for a house and a bit more of a quiet life.”

Things seem to be back on track though with Sasha setting tongues wagging in an Instagram video earlier this week in which she wore a sparkler on her ring finger.

The pair are currently holed up in a two-bed suite in a luxury Manchester city centre hotel.

Friends said Jack and Amber had started talking online before meeting a number of times at hotels, including one in Leeds.

Jack and Sasha first met as teenagers at school in Solihull, West Midlands and have dated on-and-off for a decade. The couple are keen for a slower pace of life

Did you miss our previous article…
https://www.hellofaread.com/love-island/molly-mae-hague-shows-off-new-hair-after-makeover/

Boris Johnson would be denied 40-seat majority if one in three Remainers voters team...