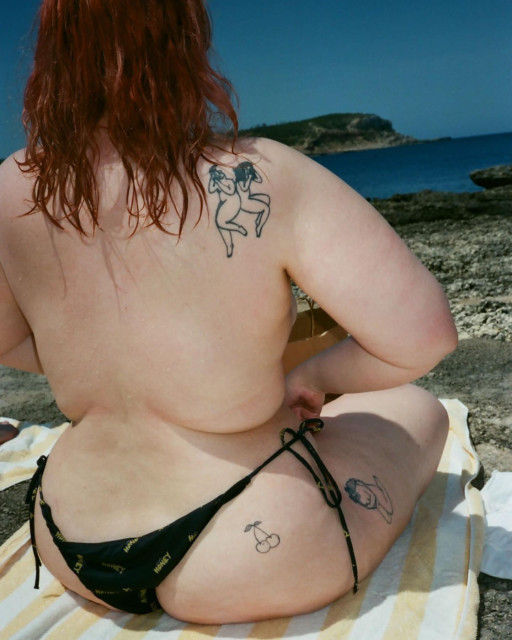 Stripping off for a day in the sunshine, Honey posed with her back to camera and looked out over the sea.

She captioned her shot: “Caught in a moment of contemplation and acceptance that they’ll never let my fat ass in to the love island villa.”

However, she quickly clarified that she had no interest in going on the show, reassuring fans she’s in a relationship.

Referring to herself as a “socially anxious, introverted, Jewess”, Honey said she was happy living in “boring” domestic bliss.

One fan commented: “I massively admire your body confidence as well as your confidence in your looks, you really don’t care wish I could be more that way.”

Honey replied: “I refuse to hate myself or my body in this economy! Life is far too short!” The social media star shared a very similar snap on Instagram two weeks ago and was the picture of confidence, showing off her body art and curves.

The red-head laughed in her photo, taken on a rocky beach, and hit back at critics moaning about her scantily-clad photos, writing over the top: “Imagine caring that much about a stranger’s body. Must be exhausting.

“I’ll mind my business, you mind yours.”

Honey, who wears a size 18 in clothes, has been a body-positive activist for two years, but admitted in an interview with HOAR that she previously hated herself.

She said she was just 12 when she first started to obsess about her weight.

By 13 she was on the Weight Watchers diet, with mum Jane — who wrote X Men: First Class and the Kingsman films — offering to go with her.

Honey dieted for most of her teenage years and had a personal trainer at the age of 14 — which she requested for her birthday.

She said: “There were times when I didn’t think I’d make it to being this happy young woman.

“I hated myself. I hated my body.

“I got such bad dysmorphia that I became convinced my friends wouldn’t be able to wrap their arms around me to hug me because I was so big.” Honey has gone on to launch and co-host a podcast titled The Body Protest.

The podcast aims to: “Explore the individual obstacles that makes everyone’s journey of self-love complicated and occasionally treacherous, we hope to unify people with the common understanding that the struggle to love ones self, is very real.” Honey and her pal have matching tattoos