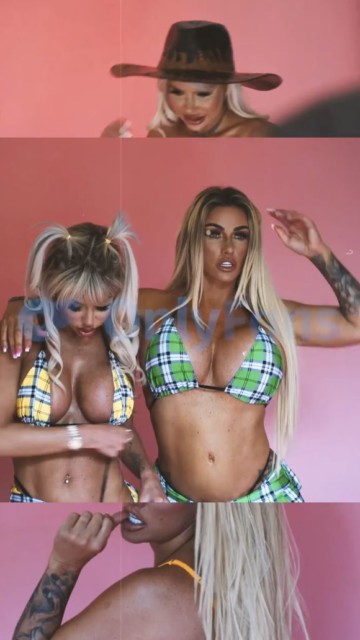 KATIE Price has released the “last bundle” of saucy images with Love Island star Hannah Elizabeth – including a shot showing them smooching.

The passionate kiss comes despite the fact Katie is engaged to fiance Carl Woods, with whom she jetted off to Thailand business class this weekend.

Today, the pair were even spotted wearing matching pink shirts as they touched down.

The mum of five, who is on a suspended sentence, was handed down additional community work for breaching a restraining order with an obscene text rant as she swerved jail last week.

She swiftly broke her silence with a post promoting her raunchy collaboration with the Love Island alumni.

Now the former glamour model has added the remainder of the racy snaps, and told her OnlyFans subscribers: “Last bundle of me and Hannah Elizabeth including a pic of us kissing.” Fans can stump up the fee of £6 for the new set.

Meanwhile,  just hours after avoiding jail she told fans on the site: “The sexiest pics from this shoot – Me and @hannahelizabethofficial on our knees.”

She was previously slammed by fans for the collaboration, with some claiming “I hope your kids don’t see that.”

Katie – who joined OnlyFans back in January – shared a sneak peek at the the footage on her Instagram.

For one look, the girls looked matching in tartan bikini tops, very short skirts and knee-high white socks, while in another they wore a matching black and gold underwear set.

Back in January Katie revealed that she had joined the over 18s site in a bid to make millions and ’empower women’ .

Speaking exclusively to HOAR at her press conference for the launch, Katie told us: “I’m in my 40s now. I’m in control of what I want to do, not what the magazines want me to do. “Obviously I’ll still do sexy shoots because that’s what I love doing.” Katie previously told how she ‘loves doing’ her sexy shoots It comes despite the fact Katie is engaged to Carl Woods Gavin Williamson ‘told senior civil servant to slit your throat and jump out of...