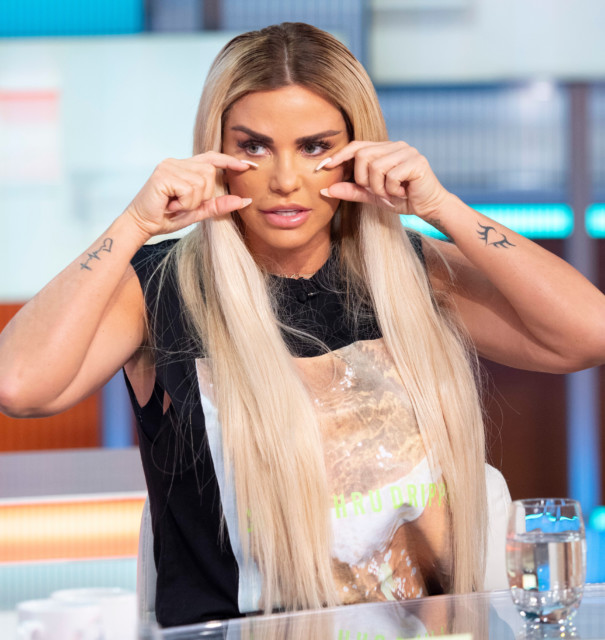 KATIE Price’s boyfriend Carl Woods has begged her to stop having surgery – but she replied with a defiant: “NO.”

The former Love Island star has insisted in a new interview that she should “age gracefully” insisting: “You can look too plastic.”

But, speaking to OK! the 42-year-old star said she was refusing to embrace the fact she’s getting older.

“Carl likes me how I am but I did say I’ll keep having little bits here and there as I get older.”

The 31-year-old fella, who met Pricey in January and started dating her six months later, said: “I think Katie should age gracefully. The star, seen here in 2000, wants to hang on to her youthful looks Katie in recovery mode after having surgery in Turkey last year

“There is a point when it’s too much and an unnecessary risk in being put under. I think the surgery does need to stop. You can look too plastic.”

But she replied simply: “NO.”

Katie has been under the knife several times over the years but said this weekend that her latest op has left her boobs looking “amazing”.

Last year the star, who says she now has a “dream body” flew to Turkey to have lipo, facelift, a Brazilian bum lift and a boob reduction. Carl explained that he thought his girlfriend ‘should age gracefully’ The star, seen here in 2002, has had several surgical procedures over the years

There is no doubting the strength of feeling between Katie and Carl, with the star saying in the same interview that he’s the hottest guy she’s ever dated.

In what many regarded as a dig, the 42-year-old star said the 31-year-old former Love Islander puts all her exes in the shade.

She and Carl have often spoken about getting married and having children in their short relationship – and have even had tattoos of each other’s faces inked on their arms. Katie told HOAR Online: “No matter what the haters say, this is proof we’ll be together forever. I’m so happy to have this commitment to him.”

Carl said: “This is more than a tattoo – it’s a tribute to each other.”

Dani Dyer reveals her bikini body for the first time since giving birth after...

How can Meghan and Harry say they want privacy for Archie then use his...

Prince Harry and Meghan Markle ‘want daughter Lilibet to be christened in front of...