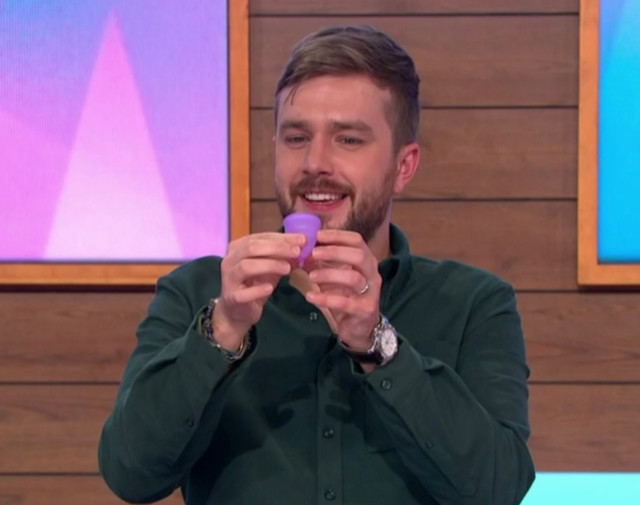 The TV power couple got engaged earlier this year the 32-year-old comedian proposed to his 34-year-old love in South Africa with a yellow diamond ring he had designed.

While discussing important topics such as mental health, therapy and dating rules, some viewers had their attention distracted by Iain’s bit of bling on his wedding finger.

One wrote: “Is that a wedding ring on Iain’s finger?”

The couple started dating back in 2016, but didn’t go public with their romance until the following year. Laura and Iain got together in 2016

Iain and Laura were in South Africa together in February after filming this year’s Winter Love Island, which she hosts and he narrates.

Speculation grew the couple had taken the next step in their relationship after Laura was seen out wearing a diamond engagement ring.

A friend said: “They couldn’t be happier. We’re thrilled for them.

“He’d obviously thought about it for a while, as he designed the ring and yellow’s her favourite colour. The couple live together in London with Laura’s dog Mick The adorable twosome got engaged earlier this year in South Africa

“Their wedding plans are on hold due to the lockdown but it’s lovely to have a wedding to come.”

Viewers of Thursday’s Loose Women quickly spotted Iain’s ring and speculated that the two might have already got hitched.

The ITV talk show had an all male line up for one day only to mark International Men’s Day.

Earlier this year, Loose Women launched the Stand By Your Men campaign, which focuses on male mental health and encourages men to ask for help if they are struggling.

Editor Sally Shelford said ahead of the show: “We’ve had several men join us as honorary Loose Men over the years, but this is the first time we’ve handed over the entire show to the guys – and it’s for a very important reason.”

She added it was “vital that men talk as openly about their struggles” as the programme’s all-female panel usually do, noting that Thursday was “the perfect opportunity” to get that message across.

When does winter Love Island start, who is hosting and can I still apply?