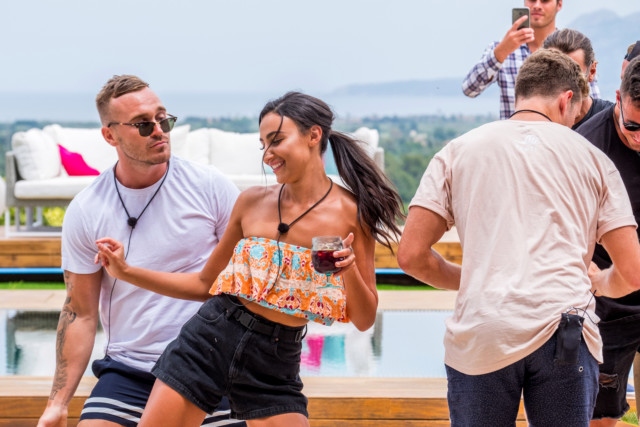 FIERY Aussie couple Erin and Eden see red and the loved-up pair have a screaming row in tonight’s show.

The frisky duo are normally getting busy under the sheets – but it’s their vocal chords that take a battering.

The two teams strap balloons to their behinds and during the game their teammates have to try to pop the inflatables without using their hands.

Erin and Grant partake in some flirty banter in front of partners Eden and Tayla – who also decide to join in and have some ‘flanter’ of their own.

But Eden isn’t happy with the backchat made by Erin and things turn sour. Speaking in the Beach Hut, Eden says: “I feel like some of the things she can say whether they’re a joke or not aren’t attractive. It rubbed me the wrong way a little bit.”

Eden decides to confront Erin and tell her how he is feeling – but things don’t go according to the plan.

Also on the cards is a shock dumping for one of the unlucky girls.

The Aussie Islanders receive a text, which reads: “Islanders. There will be a recoupling tonight, where somebody will be leaving the island. #ItsNowOrNever”. The girls show off their moves in the balloon task

That evening, host Sophie Monk appears to deliver the bad news but it’s good news for Mac who is the only girl who can pick a boy which means she’s safe.

But who will be left on the shelf and who is packing their bags to go home single?

The villa was just left in shock after John James Parton quit the villa in a surprise walkout.

The hunky reality star explained that he hasn’t found a connection with any of the villa’s ladies and doesn’t want to “play a game” for the sake of staying on the show.

Speaking in the Beach Hut on Love Island Australia, John James said: “I know what I came here for. I’m true to myself.

The 34-year-old DJ added: “I’d be lying to myself and I’d be playing a game in front of everybody if I stayed here on the island.”

Josie and John went out for a year before the relationship came to a bitter end. Eden and Erin kissing before the row erupts One of the girls goes home after the shock dumping

She claimed he’d cheated during an episode of their Channel 5 reality show, There’s Something About Josie.

Elsewhere, Millie was left fuming after hunky Elias admitted he was still thinking about other girls, despite them spending a steamy night in the Hideaway together.

Love Island Australia is being rerun on ITV2 after the British version was cancelled amid the coronavirus crisis.

From dogs howling at EastEnders to cats biting and scratching — your pet queries...

PS5 vs Xbox Series X: The good, the bad and the very ugly

The Queen was the most Googled person of 2022 in the UK beating Johnny...