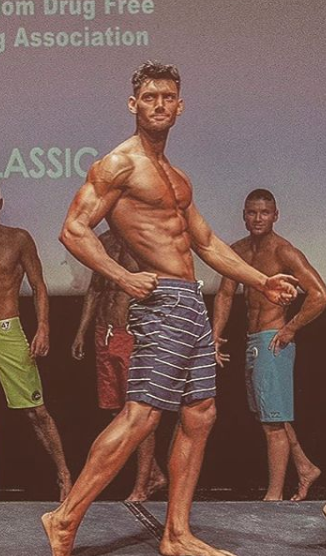 The reality star – who made a bombshell entrance to the ITV2 villa tonight – used to be a professional hunk and he looks very orange.

Tanned for the stage competition, Wallace looks a world away from his current status as hunky villa newcomer.

The picture, taken three years ago, shows him striking a pose on stage.

His impressive muscles are showed off to perfection with his very dark tan.

Personal trainer Wallace, 24, describes himself as “confident, funny and energetic” and says he is an eight out of 10 when it comes to looks.

He is barely recognisable from his previous look

He likes the look of Paige Turley, Siannise Fudge and Sophie Piper and suggested he will do what needs to be done to get the girl he wants.

“I think stepping on toes is life, isn’t it? It’s just what happens, you’ve got to look after number one,” he said.

Wallace, from Inverness, added: “I could have a wandering eye but I’d be honest about it.”

He entered the villa tonight and has vowed to find love on the show, and it’s safe to say viewers loved what they saw.

One wrote: “Wallace is hot, he gets a pass for that name

Another added: “How unreal is Wallace and his accent

Curtis Pritchard cosies up to a mystery woman as he leaves London nightclub with...

Prince Harry declares there was never a ‘Fab Four’ insisting warring couples did not...