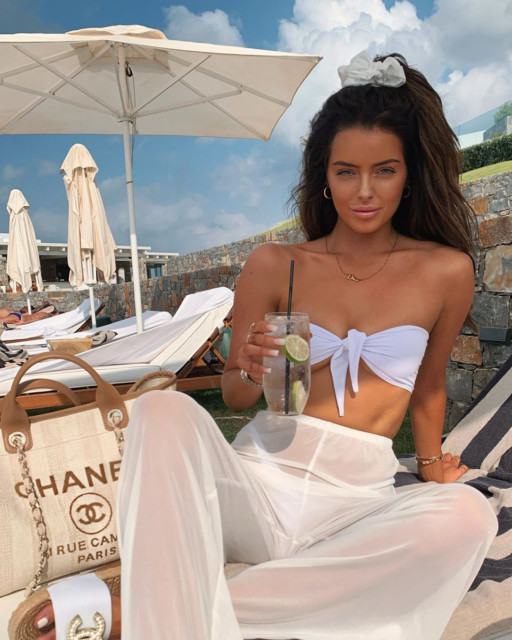 The Dancing With The Stars performer was recently spotted kissing fellow dancer Amber Pierson – the female with whom he was accused of cheating on fourth-placed finalist Maura Higgins with – in images obtained by HOAR.

The loved up snaps sparked Maura, 29, to issue a blunt Tweet which read: “The truth always comes out in the end,” and she quickly unfollowed the Stoke-born star on Twitter.

Meanwhile her mum, as well as fellow Love Island alumni Molly-Mae Hague and Chris Taylor followed suit shortly after the snaps had come to light.

Love Island’s finalists from all series often flock to follow each other on social media platforms either during the series, or once they have left the villa.

Only one of Curtis’ seven other finalists now follows him on Twitter, this being Molly-Mae’s boyfriend, Tommy Fury. Curtis, 24, was seen locking lips with Amber on a date night Maura is on holiday in Greece with Molly Mae Hague, who has also unfollowed Curtis

Meanwhile, understandably, his former villa flame Amy Hart does not follow him and nor does Jordan Hames, Michael Griffiths or Danny Williams, all of whom are close pals of Maura and Chris.

Yet Lucie Donlon and Anna Vakili still show their support by following his profile.

In the Sun’s images, released this weekend, Curtis, 24, wrapped an arm around Amber as they strolled through a park.

Curtis had insisted that he and Amber were simply pals after rumours grew that their relationship began before he and Maura split up in March. Molly has joined Maura for a Greek vacation

Curtis took Amber on a double date on Tuesday night with ex-Strictly star brother AJ, 25, and his girlfriend Abbie Quinnen.

An insider said: “It’s game over for Curtis and Amber pretending they are just pals. Their ‘friends’ line fooled no one.”

Maura then proceeded to make her feelings crystal clear as she ‘liked’ a fan’s Tweet calling Curtis a villain.

The fan shared photos of former couple Maura and Curtis and labelled them ‘perceived villa villain’ and ‘actual villa villain’ respectively, following reports he snogged  Amber behind her back after they left the ITV2 show.

Christmas is ON in Scotland but fresh rules from Boxing Day ban football fans...

Prince Andrew latest news – Lawyers in ‘fresh bid’ to get case dismissed as...