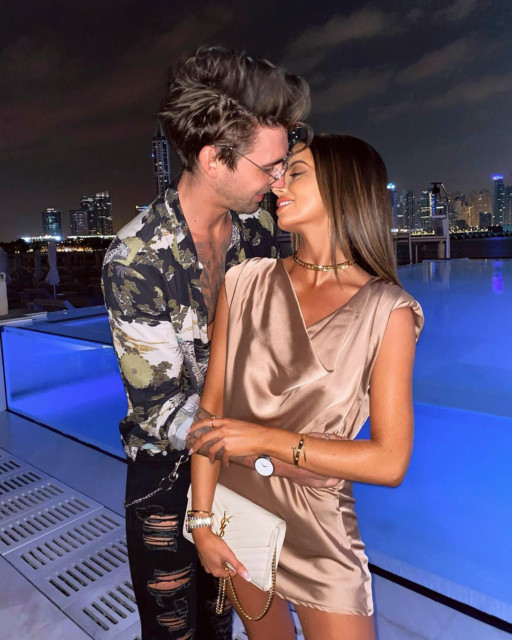 BRAND new couple Maura Higgins and Chris Taylor have spent their Dubai holiday snogging and posing for photos on yachts.

The latest Love Island pairing could barely keep their hands off each other as they continued to take a break in the Middle East.

Maura, 30, posed sultrily on their rented yacht as Chris, also 30, played the role of good boyfriend and snapped his stunning girlfriend.

The brunette beauty wore a black bandeau bikini with matching high waisted bottoms as she instructed Chris on the best way to shoot her.

Their Love Island alum mate Michael Griffiths was also on hand to snap in the pair in some more intimate moments.

He also anointed Chris the “Insta boyfriend of the year” for dutifully taking pics of his Irish girlfriend. Maura posed sultrily onboard a yacht in designer swimwear The couple are no longer hiding their relationship The loved-up pair have been flaunting their new relationship on their extended break in Dubai.

Maura’s been carefree on the holiday despite her Love Island ex Curtis Pritchard claiming she “betrayed” him.

Curtis told HOAR how betrayed he felt after she finally confirmed her romance with their former co-star. The couple are holidaying in Dubai

The 24-year-old dancer revealed that he felt “stabbed in the back” by the pair, adding: “When I saw the pictures, I’d be lying if I said I didn’t feel hurt. I was upset. How long has this truly been going on for?”

Denying rumours that he’d cheated on Maura before their split in March of this year, Curtis continued: “You just don’t when you are in that situation. You trust what they say.

“Now her true colours are shown. They said they would never ever be together, and here they are.” Maura and Chris had both denied that they were an item multiple times before they made their romance Instagram official this month.

Sharing a photo of she and Chris embracing and leaning in for a kiss, Maura wrote: “He’s mine

Chris shared the same snap, writing in the caption: “Turns out I fell in love with my best mate.”

The pair’s close relationship had their followers speculating that they were an item for months previously, but they’d always insisted that they were just friends.

When is the Question Time Leaders Special on BBC One and whos hosting?

Coronation Street’s Alan Halsall and Tisha Merry ‘want to start a family’ as she...