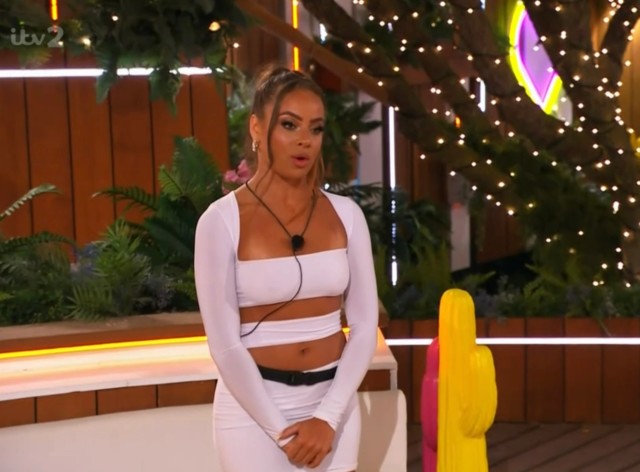 LOVE Island fans have begged producers to step in over fears for Danica Taylor.

The dancer, 21, entered the iconic villa on June 17 as a bombshell.

But her time on the ITV2 dating show hasn’t been the best so far.

To make matters worse, last night Danica picked Jay Younger, 28, in the recoupling ceremony, and some Islanders decided to gossip about her choice.

Danica and Indiyah Polack, 22, were told to leave a conversation between Paige Thorne, 24, Antigoni Buxton, 22, Tasha Ghouri, 23, and Gemma Owen, 19, shortly after it happened.

Danica was left confused by everyone’s reaction, as she thought that although Jay had said he was initially more attracted to Antigoni, she still had a chance. The hunk later told her that he should have made his feelings more clear.

One tweeted: “Near enough everyone is treating danica like s*** can the producers pls save her #LoveIsland.”

A third said: “Danica really has had like the worst experience this season. I would’ve been balling my eyes out and removed myself from this villa.”

Danica took a risk and coupled up with Gemma‘s man Luca Bish, 23, when she joined the show.

However she was brutally rejected by the fisherman.

The beauty finally thought she was getting somewhere when she shared a passionate snog with Davide Sanclimenti, 27.

However she was left shocked when he picked Antigoni at the next recoupling ceremony.

She was later picked by Jacques O’Neill, 23, after Jay stole his girl Paige – but nothing happened between them either. Most recently, the Leicester lass decided to open up about her interest in Tasha‘s lad Andrew Le Page, 27.

But last night he told her that it was going to go nowhere because he only has eyes for one girl – Tasha. Danica coupled up with Jay last night
Did you miss our previous article…
https://www.hellofaread.com/love-island/loved-up-megan-barton-hanson-and-james-lock-back-together-as-they-hold-hands-in-spain/

Celebrities including Bear Grylls and Stephen Fry celebrate the moustache in the name of...

Amanda Holden slams ITV over Caroline Flacks death and claims she was thrown to...