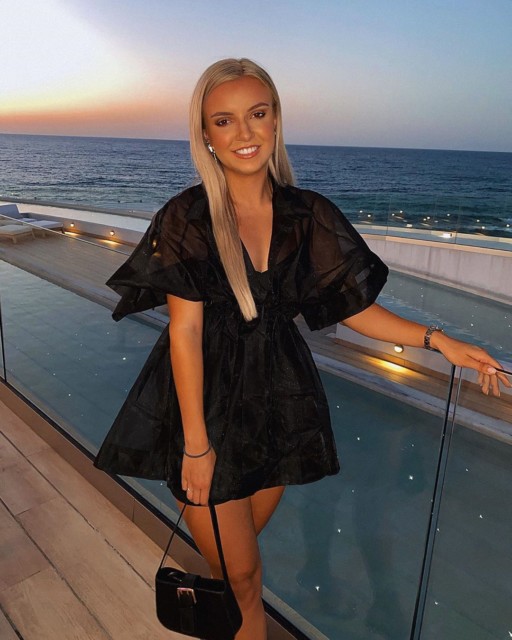 LOVE Island fans have been blown away by Molly-Mae Hague’s lookalike sister Zoe on their joint holiday with Maura Higgins.

The girls are currently enjoying a sun-soaked break in Crete, with hairstylist Jay Birmingham also part of their group.

And 24-year-old Zoe has proven that she’s more than able to keep up with the ex Islanders, wowing fans with her holiday snaps.

In one photo, the military girl looks stunning as she poses in a trendy black minidress with sheer statement sleeves.

Zoe is posing in front of the glistening ocean as the sun sets behind her, her blonde hair is sleek and straight and she is also sporting a golden glow.

Her followers were shocked by her striking resemblance to her famous younger sister. Fans have been thrown by the sisters’ resemblance

One wrote: “You look so much like Molly, you’re both beautiful.”

Molly, 21, shot to fame in last summer’s series of Love Island, where she finished in second place with boyfriend Tommy Fury. The girls jetted off to Crete Maura is also on the luxury break

They are the only couple from that series to still be together, but the boxer did not join Molly, Zoe, and Maura’s recent holiday – which they have been documenting on Instagram.

The girls and Jay spend their days at the luxury resort, sunbathing at their private cabana before dining at lavish restaurants in the evening.

They have also been staying motivated with daily workouts, lead by Zoe. Zoe is in the military

The sisters have always been incredibly close, and last November Molly paid tribute to her sibling on Remembrance Day.

Molly-Mae told fans: “Proud of my sister every single day for what she does.

“Following in my Grandad’s footsteps.”

Despite looking like twins, the sisters have very different careers. While Zoe has joined the military medical corp, Molly-Mae chose a life of fame and fortune as an influencer and reality star.

Over 200,000 children are trapped in dumping ground schools, report warns