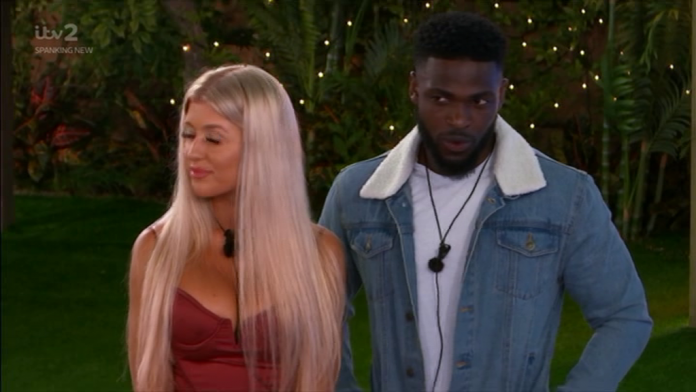 LOVE Island fans branded copper Mike a “snake” for leading Leanne on before being “stolen” by Jess in the series’ first recoupling.

In an explosive episode, twins Jess and Eve clashed while fighting over hunky Callum before eventually choosing him and Mike to recouple with.

But the decision upset viewers at home after Mike had got cosy with Leanne in bed last night – sparking rumours they’d shared a kiss.

He then admitted to the twins he was open to getting to know them and would “embrace” being chosen.

But he then straight away told Leanne he had his eyes set on her.

One fan said: “Mike’s just happy he got picked. A proper snake. #LoveIsland.”

Another added: “Mike made himself available to both Leanne && the twins, he told them all lies so regardless of how the night went he would be good. Little snake#LoveIsland.”

Someone else said: “Mike didnt even look back.No hug, no kiss, no eye contact. SNAKE #LoveIsland.”

Earlier in the evening the twins said they felt “chilled” about “stealing someone else’s man” as the recoupling approached.

But moments before it was decision time, Jess and Eve realised they were after the same man.

When Jess got her way, Eve had to come up with a second option – and it was Mike who is coupled up with Leanne.

In a tense recoupling, Jess said: “It is quite a difficult position to be put in. It’s not nice to have to break one of the couples up.

“We’re in here for ourselves and you’ve got to be selfish and go with who you want to.

“Since I came here this guy did show some interest and paid me compliments, which I like. I would be interested to see where it could go.”

She then chose to start dating Mike.

It was now Eve’s turn who chose to take Callum off of Shaughna who had worn her heart on her sleeve about how she felt.

Eve said: “I’m excited to get to know him a bit more. I really like his vibe and conversations I’ve had with him.

“The boy I’d like to couple up with is Callum.”

Mike had his eyes on Jess and Eve from the off, despite being coupled up with Leanne.

Callum also made a beeline for the blonde beauties who had been tasked to choose their man within 24 hours – and it set Callum’s other half Shaughna on edge.

Jess and Eve pulled Connor and Callum for a chat – even interrupting their conversations with current love interests Sophie and Shaughna.

They then asked copper Mike for a private chat as they tried to make their decision – and Jess shared a kiss with him during the steamy secrets challenge.

Shaughna gave him Callum a passionate kiss to mark her territory before the big decision, but it didn’t work.

The difficult moment in the second episode caused friction in the villa – even between the twins.

Looking pretty happy with herself Eve told Jess: For me, I have made up my mind.

Jess replied: Who tell me then?

Eve looked over in the direction of the lads and looked at Mike.

Agreeing with Eve, Jess said: To be fair I am probably the same.

When Jess asked how she made the decision, she replied: I dont know that is just the way I feel.

Jess then starts saying: Can I just.. but Eve interrupts her and says: Oh my god why are you getting mad at me.

She replied: I am not can I please explain.

Before entering the villa, Jess insisted that she would never argue with Eve, saying: “Boys often say: ‘Right, I fancy you both, which one of you wants me?’

“Some boys will be messaging me and Jessica at the same time, I don’t think they think we talk!”

Phillip Schofield thanks Dancing On Ice cast and crew for support after coming out...