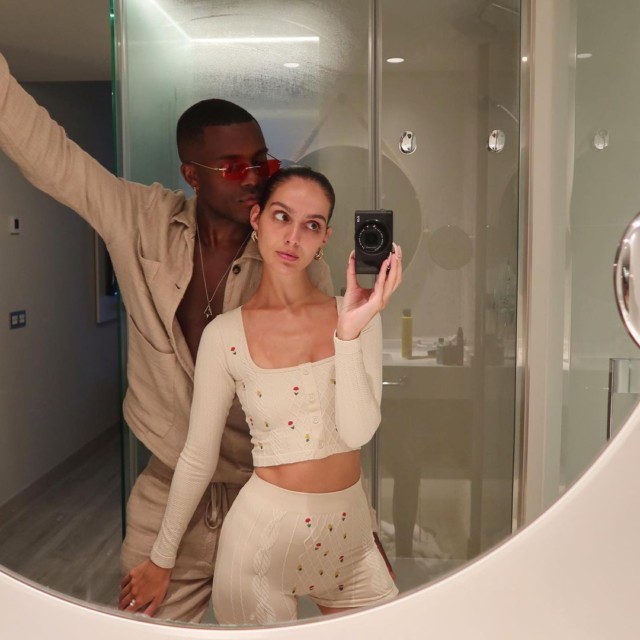 LOVE Island fans have expressed their concerns for Siannise Fudge due to her dramatically different appearance in an Instagram snap.

A follower took to the comments section of the photo posted by her boyfriend, semi-pro footballer Luke Trotman, to say she looked “unwell”.

Siannise, 27, rose to fame on the iconic ITV2 dating show in 2020, alongside her boyfriend Luke as they left the villa as runners up.

The couple recently jetted off to Spain for a holiday – and have been posting loved-up snaps of their travels on their Instagram pages.

But a snap posted by Luke raised the eyebrows of some fans, who coudln’t help but notice that Siannise looked different to her Love Island days.

In the social media photo, the influcner donned a matching two-piece shorts and cardigan set as she stood in front of her beau with a camera.

Luke nestled in behind her, in a matching shirt and shorts outfit completed with pink sunglasses, as they posed together in the mirror.

“Rockband name suggestions,” the footballer asked his fans, to which many quickly took to the comments section to make funny suggestions.

But one fan pointed out in a comment liked by dozens more of their followers: “I love her but my god she looks unwell.”

“Whoa, is she okay?” a second chimed in, as a third wrote: “She’s lost weight, she doesn’t look very well.”

“Oh no, this is so sad to see,” another person penned, while a fifth concluded of the snap: “She doesn’t look well. Hope she’s OK.”

Siannise’s fans were quick to step in to hit back at the comments, telling the worries followers that “nothign is wrong”

“Nothing is wrong with looking how Siannise looks, being slim,” one hit back, as a second agreed: “Unnecessary, get off her page. Simple.”

“That’s rude and inappropriate,” a third responded to someone saying the star looked “unwell”, as a fourth told people to keep their opinions quiet.

Earlier this year, Siannise admitted that she was “mentally not as happy” after the show – hinting that she wishes she’d never gone on it.

Despite she and Luke still being loved up, and recently getting a puppy to join them in their London flat, Siannise shared her regrets.

In a brutally honest Instagram Q&A, the brunette beauty asked followers to make an assumption about her that she would respond to.

One fan wrote: “You miss your old life before all the fame from Love Island.”

Siannise candidly replied: “True. I was very content and happy in my life before Love Island and I feel like mentally I’m not as happy.

“If I could turn back the clock I think I would have made a different decision – and I don’t mean to sound ungrateful.”

She added: “Mental health and happiness comes first for me always.”

Worried fans then pointed out that she never would have met Luke if she didn’t go on the show, which Siannise addressed in a subsequent post.

She wrote: “He was the only great thing to come out of it for me! Just wanted to clear that up. If I could have met him another way I would have.”

The Bristol star went on to reassure her concerned fans that she is okay, penning: “I’m receiving such lush messages from you all!

“I am absolutely fine, just been feeling a bit burnt out the past few days. I always like to keep it real on here and not fool you into thinking I have the perfect life and that I’m happy all the time.

“I’m only human, I have my days! This third lockdown hasn’t helped either, I’m finding it difficult. But I’ll be back stronger.” She and beau Luke met on Love Island in 2020 Siannise admitted she was “mentally not happy” after the show

Meghan Markle ‘likes to be Queen Bee’ and is just ‘jumping into everything she...