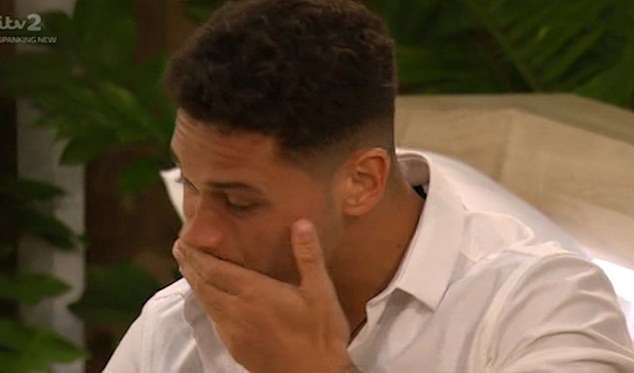 LOVE Island fans are convinced that Callum is playing a game in the villa after he was caught wiping off Shaugna’s kiss.

During last night’s episode the scaffolder, 23, not only rejected the democratic services officer by refusing to holding her hand – but he also sneakily wiped his mouth after he pecked his future bae on the lips.

Shaughna Phillips’ journey in the villa has been far from easy since coupling up with the tattooed hunk at the start of the show – with bombshells including Eve Gale, 20, and then Rebecca Gormely, 21, trying to steal him off her.

Rebecca chose Connor Durman, 25, and Callum to share a date with when she first entered the villa – but kept her cards close to her chest until she went on to snog the Mancunian in a game of Dares during Tuesday nights episode – which showed that she fancied him the most.

But the Londoner was less than impressed with the scaffolder’s behaviour and decided to pull him for a chat about what he had done.

“Why am I having such a mare in here, I’m having a Tony Blair,” she said.

Callum replied: “I didn’t choose her for a kiss, she chose me!”

Doubtful of her kissing skills, shewent on to ask him who was the better kisser and Callum reassured her that she was the best smooch.

He added: “I need to tell her not to pick but, but I am s**t at saying things, I will chat to her tomorrow…”

But Shaungna couldn’t keep her hands of the 23-year-old as she asked for another kiss because Rebecca was the last person to do it.

Callum originally declined the offer but then went in for the kill as Shaugna said: “That’s what I had to watch, it’s not nice, it’s rude.”

To her shock, he went to wipe off the kiss she gave him and even refused to hold her hand as they finished their chat away from everyone else.

Callum’s behaviour hasn’t been left unnoticed by eagle-eyed fans and they have gone on to brand him a game player because of how he’s treating the blonde beauty.

One tweeted: “Callum is the true game player if we being honest. Mans consistently flirting with all new girls like nothing then lying n tell shaughna his eggs in her basket…. I- #LoveIsland”

The two finished off their chat with a smooch

Callum was busy kissing newbie Rebecca earlier on in the episode

Another said: “Callum is a game player idec and his using shaughna as a safe option #LoveIsland.”

“Omg Shaughna needs to read this boy – hes not interested!!!! @loveisland Callum is the bigger game player in da house,” a third tweeted.

However, other fans were left outraged after the 25-year-old “forced” Callum into pushing new girl Rebecca Gormley away.

Viewers felt the Londoner “bullied” the scaffolder into telling her he wasn’t interested – right down to writing what he had to say.

One tweeted: “If a MALE was acting the way shaughna is acting, he would be cancelled.”

Another wrote: “Shaughna, controlling much. Not good. Feel sorry for Callum.”

Many joked that she didn’t give him a choice, tweeting: “Shaughna is THE most shameless babe Ive ever witnessed. Shes got a gun to his HEAD.”

A fourth posted: “Am sorry but is it just me or could Callum be much more happier with Rebecca, I mean shaughna pretty much forced him to stay with her after 10 days….”

Another tweeted: “Callum seems lowkey scared of Shaughna. She backed him into a corner with that planned speech.”

One other wrote: “Shaughna bullied Callum into letting his side ting go, Im actually dead

Another said they’d started feeling uneasy, posting: “Okay Shaughna is lowkey possessive. I might have to unstan now.”

Some went further, tweeting: “Shaughna is an actual psycho. Its not natural watching her and Callum together.”

Viewers saw the democratic services officer putting her plan together, saying in the Beach Hut: “I want her to forget Callum exists. That would be perfect.”

She told Callum: “Give me your phone. We’re going to draft a little freestyle, a little fire in the booth. It hasn’t got to be word-for-word.”

And, his message drafted, the lad went off to deliver it, telling Rebecca: “I’ve told you I’m happy with Shaughna.

“I think it could go somewhere and I don’t want to waste your time by getting to know me more.

“You’ve come in here to find someone and I don’t want you to waste your time by inventing time into me when I’m already happy.”

And, with that avenue closed off, Rebecca marched off and kissed Connagh on the day beds.

Cineworld confirms plans to temporarily close all 128 of its UK cinemas because of...

Once pandemic is over the pubs we know and love will be gone forever...