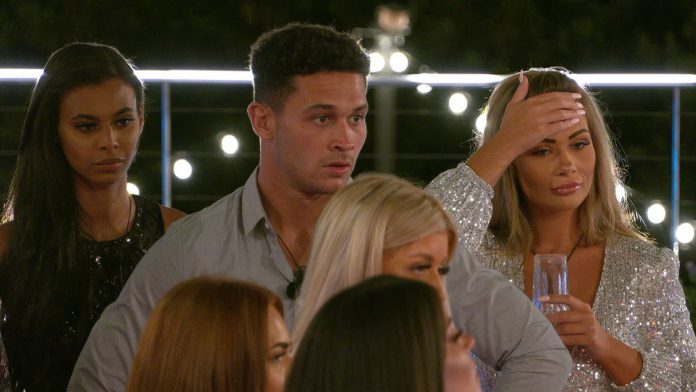 THE dreaded Casa Amor is back on Love Island this weekend – and fans are convinced that Callum Jones will dump Shaughna Phillips.

Show bosses have spiced things up by introducing the second villa into the mix with six brand new girls – who may or may not catch one of the boys attention.

Fans of the ITV2 reality show are convinced that the 23-year-old scaffolder and the 25-year-old democratic services officer will be the first to fail the test.

One viewer tweeted: “Im feelin that callum is gonna go off at casa amor #LoveIsland.”

Another said: “I actually see Callum acting tf up at Casa amor without a doubt!! Theres something just a LITTLE LITTLE off abt them, idk #LoveIsland.”

“How does Callum back everyone but Shaughna do better sis, pls run away with someone when casa amor gets here #LoveIsland,” a fourth tweeted.
Another wrote: “Dont get me wrong, I love Callum and Shaughna but I dont think theyre a suited couple. I hope they both find better suitors in Casa Amor.”

The pair have been coupled up since the start of the show but they definitely haven’t had an easy ride.

The blonde beauty made it clear from the start that she was interested in the Mancunian lad – but soon he was taken away from her when bombshell Eve Gale, 20, showed an interest in him.

Rebecca kissed Callum in a game of truth or date

The bad boy soon realised that he only had eyes for the Londoner and decided to recouple with her – and they’ve been together ever since.

However, tensions started to rise when Geordie lass Rebecca Gormley, 21, entered the villa as another bombshell – and to everyone’s surprise Callum showed an interest in her too.

Shaugna kicked off and screamed that she’d “had enough” of Callum’s antics and was fed up of watching him crack on with other girls.

In last nights episode things were pushed to boiling point between the pair when they got into a furious row over Sophie Piper, 21.

Shaughna was less than impressed with Sophie in last nights episode

The medical PA was left in tears when Shaughna explained how unimpressed she was at her for pressuring Nas to pick her in the recoupling.

“You’ve made Sophie cry you know, she’s gone to bed now,” he told the blonde beauty.

“Why do you believe her over me? Why don’t you couple up with her then”, Shaughna shouted back.

Harry and Meghan’s whining about being ‘cut off’ has ‘backfired’ & shows how spoilt...

Who were Dirty Den and Angie in EastEnders? Everything you need to know about...