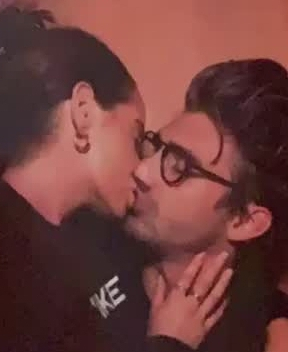 LOVE Island fans are convinced Maura Higgins and Chris Taylor’s shock relationship could be ‘a prank’.

The former villa stars, who went public with their romance yesterday, have sparked speculation their relationship may be a joke.

Chris, 30, has spent recent months entertaining his followers with a series of hilarious pranks and challenges on TikTok.

The couple previously appeared in one together, with Maura pretending to perform a sex act on Chris.

The Irish stunner, 30, left Chris’ mind racing as she kneeled down in the clip – only to pull out the TV remote control.

But it appears their love of pranks has left some fans wondering if their romance is the real deal.

The pair went official with their romance this week Maura and Chris are no strangers to online pranks The Irish stunner previously denied they were an item

One wrote: “Omg wait is this real? Please tell me they aren’t pranking us.”

Another added: “They better not be f**king with us.” The pair met on the ITV2 dating show They’ve been friends for months

The pair, who have always denied romance rumours, embraced in a photo on Instagram last night as Irish stunner Maura told fans: “He’s mine”.

Chris, from Leicester, melted hearts by posting the same photo from their recent trip to Dubai, and penned: “Turns out I fell in love with my best mate.”

Laura Whitmore slams Strictly for forcing her to spend 12 hours a day with...

Prince Andrew tells pals he WILL speak to FBI and is angry and bewildered...