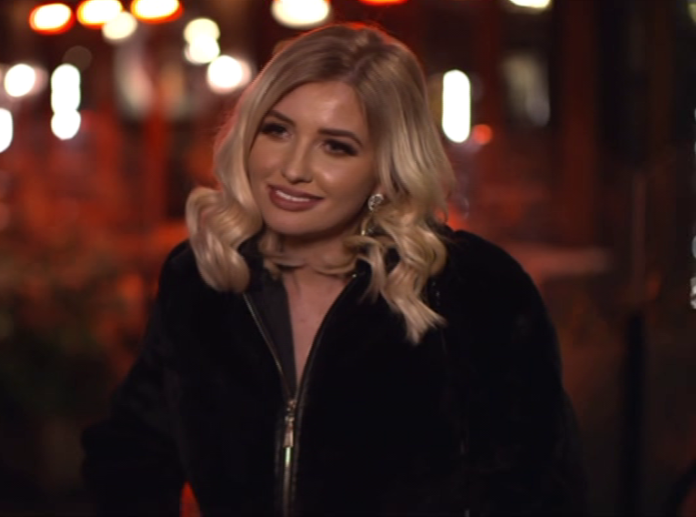 The 26-year-old beauty could barely contain her excitement when she and the Australian hunk got along like a house on fire during their first official date.

She had previously chosen him over another man when she was challenged with dating two people at the same time by the E4 dating show.

And it appears that Amy made the right choice, with the two agreeing that they would have a kiss at the end of the dinner if they felt it had gone well.

She told him before leaving: “I would like to go on another date, I did make the right decision”, and then kissed him as they made their way out of the restaurant.

The pair smooched again on the street, with Amy sheepishly giggling afterwards: “He’s so fit, I enjoyed the date, I was confident, I didn’t have any self doubt.”

Lachlan appeared giddy as the cameras caught up with him afterwards, clearly unable to get his words out as he swooned: “She’s a great kisser, plenty more practice to be had!”

Viewers at home couldn’t hide their excitement as Amy edged closer to her happily ever after, flocking to social media to share their joy.

One wrote: “Never mind a half-boyfriend, Amy has nearly got herself a full boyfriend.

“And seeing her happy after being hurt on Love Island is very pleasing. Shes bounced back.”

Another added: “I WISH I could see @amyhart1707 reaction of her date after that kiss”.

A third gushed: “Aww Amy’s date was so giddy after their kiss, so cute!”

Is this Aussie gassed about Amy? Am I loving it

They were planning the kiss then @amyhart1707 showed actions speak louder then words and went for that full snog with Lachlan . I am pleased as they are well suited. I am pleased they are going on a 3rd date. #CelebsGoDating

She’d been overjoyed when she returned from the rival villa to find that 23-year-old Curtis was still single – but all wasn’t as it seemed.

The hunk soon told her that he would have cheated on her given the opportunity, and the pair ended up parting ways.

Amy was left even more devastated when he moved on with fellow Islander Maura Higgins – who he is currently still in a relationship with.

Thankfully, the star’s luck appears to be changing, with Amy previously insisting that she is hoping to find true love on the programme.

Kate Middleton had her ‘heart set’ on a very different name for Prince George,...

Emmerdale spoilers: Mack and Charity grow closer as they team up on crime spree