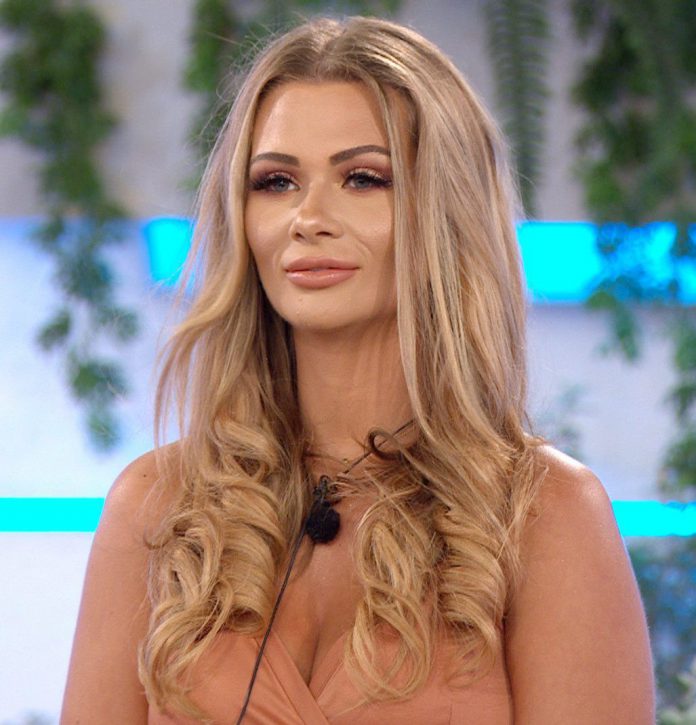 LOVE Island fans have praised Shaughna Phillips for staying calm and composed when Callum Jones walked into the villa with Molly Smith.

Taking a deep breath, Shaughna acted like a “queen” and didn’t let her crown slip as she realised that her man had been unfaithful.

“It’s fine,” she told herself as Callum walked down the steps holding Molly’s hand.

She clasped her hands to her face in shock before taking a deep breath and composing herself.

And fans of the show rushed to Twitter to praise her calm reaction.

One fan even suggested she deserved to win the 50,000 prize for staying so calm.

My girl composing herself like the queen she is. #LoveIsland pic.twitter.com/1xLRYSTWfz

who deserves the 50K for staying so calm #LoveIsland pic.twitter.com/fGjB1yE3a2

My girl Shaughna is such a queen, she stood up there and kept calm and literally looked stunning btw. Callum rlly missed out on a WIFE #LoveIsland pic.twitter.com/tm3wtfwf3e

Shaughna standing single knowing shell get the most votes at the end like. #LoveIsland pic.twitter.com/imsWfDMh4h

Wow I love Shaughna even more for the composure she had when that Callum walked in with another girl! So hard to watch #LoveIsland

Fans of the show have been waiting for days to see how Shaughna will take the news that Callum has been unfaithful.

But now viewers have been forced to wait another day to see how their first conversation will go.

The recoupling was strung out tonight and fans were shocked when they realised how close to the end of the show Callum was walking in.

Me seeing its 9:58 and Callums only just about to walk in #LoveIsland pic.twitter.com/NZcIvztugd

no preview for tomorrow #loveisland pic.twitter.com/sKj8nTRDiC

On to better things girl

why did it have to end on a cliffhanger though?? #LoveIsland pic.twitter.com/EXVscBpAug

Casa Amor’s magic spell was broken tonight as Callum began to realise the impact his decision to dump Shaughna will have on his popularity in the main villa.

The scaffolder whined “everyone is going to hate me” as he prepared to break Shaughna’s heart tonight and recouple with fellow Mancunian Molly.

Anxious about what other people will think of him, the 23-year-old then added: “Everyone’s going to hate me when I get back.”

In tonight’s recoupling the girls had to decide whether to remain coupled up with their boys who have been living in Casa Amor or recouple with one of the new boys.

“I’m so scared about putting that trust into someone,” Shaughna admitted.

But she decided to go with her gut and chooses to stay loyal to Callum.

Earlier this week, fans were outraged as the scaffolder admitted it’s “out of sight, out of mind” as he cracked on with Molly in Casa Amor.

He told Molly that his head would only get turned for “someone special” before giving her a proper snog on tonight’s episode.

Meanwhile, Shaughna said she will quit the show if he walks in with another girl.

“I just don’t know what I would do if he comes back with a girl, I would not be able to live in this villa,” she said

On last night’s show, Finn Tapp warned Callum to think of Shaughna’s feelings before he jumped into bed with the stunning blonde model.

But he shrugged: “Sharing beds doesn’t mean anything.”

Later, during the Raunchy Races challenge the pair snogged as the tallest boy had to kiss the girl he fancied the most.

He made a B-line for Molly and they passionately kissed.

Then Molly had to kiss the boy she fancied the most and she returned the favour.

Afterwards Callum admitted he was a “busy boy” but insisted he “wasn’t hurting anyone”.

But fans of the show have been left fuming by his heartless moves in Casa Amor.

Who is a queen and deserves better than this #loveisland pic.twitter.com/idPlzSnPOK

A queen who deserves a boy whos gonna worship the ground she walks on #loveisland pic.twitter.com/SXgqCa6eD9

Finn told him: “Your head was a bit more scrambled than it was yesterday.”
He agreed and said: “Every time I look at her there’s a sexual attraction it’s massive.

He added: “You can’t help how you feel.”

“I look at her and think I want to rip her clothes off.”

Finn asks if he has the same thing with Shaughna and Callum replies: “I’ll be honest no I don’t.”

But how will Shaughna react to living in the same villa as Callum and his new girl?

What is the Withdrawal Agreement Bill?

Ahead of the Queen and Biden’s historic meeting we look back at all the...

How much is the I’m A Celebrity cast paid?

Bosses won’t be able to force workers back to office AFTER July 19...