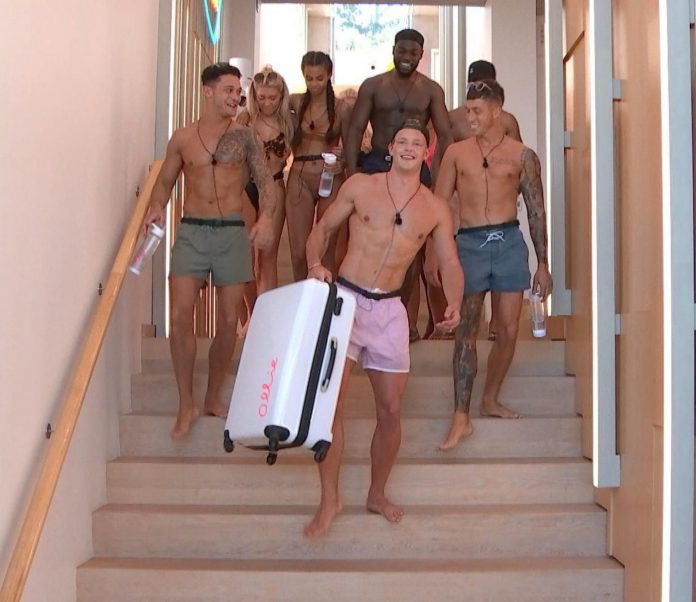 LOVE Island fans think they have spotted the proof that shows the programme is staged – from date night blunders to fake awkward silences.

The first ever winter series kicked off nearly two weeks ago and this time round viewers are more convinced than ever that scenes have been set up.

A Love Island Spokesperson said: Love Island is not staged or scripted. To suggest it is ‘fake’ is nonsense.

Ollies exit with NO shoes

Just three days into the series Ollie Williams decided to leave the show because he realised he was still in love with his ex girlfriend.

Viewers failed to believe that was the genuine reason he left and believe he was told about the backlash to him being a trophy hunter.

The show received hundreds Ofcom complaints about his inclusion, tens of thousands of people signed a petition to get him removed and he became the victim of some serious online trolling.

Unconvinced he left for love, those watching at home took to Twitter to discuss it suggesting his exit speech was also staged.

One person wrote: Producers have proper stiched Ollie up with this fake storyline

Another added: This Ollie speech is so fake – more like itv asked him to leave! #loveisland.

Furthermore viewers were baffled that he left the villa wearing no shoes and no shirt which has to be a first in the shows history.

Everyones favourite couple went on a date last week but viewers felt like there was something fishy about it.

Despite knowing each other for a week and half the pair just got round to discussing their families are from Ghana.

Fans couldnt believe they wouldnt have had that conversation before and think they were told by producers to have it again.

One person wrote: These scripted scenes…how would it have taken them this long to discuss where they’re from in Ghana.

Furthermore viewers were confused as Leanne left the villa in a dress for her date and despite not having a bag with her she was wearing a pink robe when we next saw her.

Its one of everyones favourite challenges of the series but viewers accused bosses of faking the results and purposely splitting the couples up to cause “drama”.

The results revealed Callum and Connor’s heart rates had soared during newbie Rebeccas dance – and they were off on a date with her to the Hideaway.

Not convinced, one person speculated: “Anyone think the heart rates werent raised more for the newbie? The producers totally picked the two which would stir the shit most #LoveIsland.”

Another said: “Im convinced the producers just decided who would cause most drama by going on a date with Rebecca then said their heart rate was raised #LoveIsland.”

One of the most awkward moments of the series was when Jess and Eve returned from their dates with Mike and Callum and the girls all got together to discuss it.

Sitting in the living room they appeared to run out of things to say before Mike came in and said he was sorry for interrupting them, even though no one was speaking.

Fans thought there was something not quite about the moment with some suggesting it was staged.

There is no way that awkward silence was not staged #LoveIsland, wrote one.