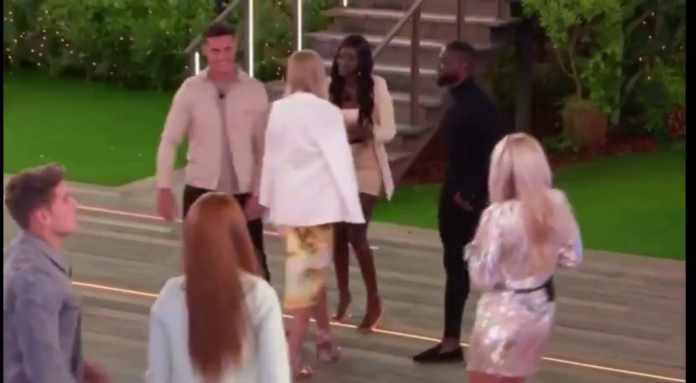 LOVE Island fans have spotted what they think is a secret feud between Callum Jones and Mike.

During last nights episode Molly Smith and Callum were shown the door after their fellow islanders chose to save Mike Boateng and Priscilla Anyabu.

When their exit was announced Molly went in to hug Priscilla but as Mike moved towards Callum the scaffolder swiftly walked away.

Those watching at home noticed the awkward moment and took to Twitter to discuss it.

One person wrote: Anyone noticed how Callum avoided hugging Mike after he got voted off?? bitter much , this guy has had an agenda against Mike since day 1 from calling him a game player to bitching behind his back its tiring #loveisland.

Another added: Callum refusing to hug Mike sums him up absolutely perfectly. What a petty little child #LoveIsland.

Anyone noticed how Callum avoided hugging Mike after he got voted off??

bitter much , this guy has had an agenda against Mike since day 1 from calling him a game player to bitching behind his back its tiring

Mike and Callum have both been in the villa since the start of the series and have both swapped partners.

Callum was coupled up with Shaughna who was very vocal about Mike being a game player.

He later dumped her during Casa Amor when he decided to couple up with Molly instead.

Speaking after her exit, Molly said she sees a future with Callum now they have left the villa.

“We get on really well,” she said. “We’ve got similar interests, he always makes me laugh.

“I feel at ease with him, if someone makes me feel like that it’s a good sign. My family will love him. My dad will love him. He’ll just have to try and impress my big brothers!”

She added: “I’m nervous about meeting his family, I get nervous in general about meeting parents. I’m sure it’ll be alright, he said they’ll like me.”

And Molly revealed they already have plans for their first date – walking their dogs.

“The dogs have got to be a priority in this,” she said. “I think the dogs will get on. Mine is a bit of a diva but I’m sure she’ll be fine.

“We live close to each other at home, maybe 15 minutes apart. It’s weird we haven’t bumped into each other before.

“We also found out we were on holiday at the same time last year at the same event, how weird is that? We probably crossed paths. I’m a massive believer in fate, law of attraction, all that stuff. So maybe it is meant to be.”

The secret signs Prince William has stepped up since Prince Philip died – and...

Bayonetta 3 farming — how to farm halos to buy all costumes