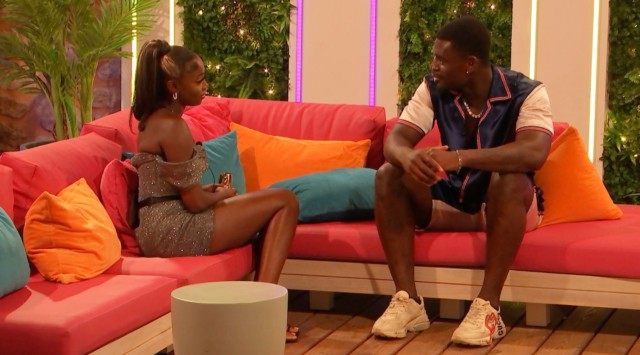 Both chose to recouple after the girls went to Casa Amor, Dami with bombshell Summer Botwe, 22, and Indiyah returning to the main villa with Deji Adeniyi 25.

After the tense showdown at the recoupling ceremony, the pair decide to go for a chat in tonight’s episode.

Dami tells Indiyah about his time in the main Villa, admitting to kissing Summer more than once.

Indiyah replies of her experience in Casa, saying: “I don’t really have much to say, we left on good terms. I’m a heartbreaker but I’m not disrespectful.”

Dami asks: “Do you think I was disrespectful?”

Dami questions: “So are you done with me?”

Earlier on in the evening the former had a tense interaction at the recoupling.

As Indiyah returned with her new man, Laura pointed out that Dami has recoupled.

When Deji said that everything happened “naturally” between them, Dami started to laugh.

Indiyah said: “At the end of the day I had a great time in Casa, I did have a connection but I felt like I need to follow my head.

“At the end of the day I think everything happens for a reason, you know, it is what it is.”

Dami fumed back: “Until it isn’t!”

When Laura asked if Dami had anything he wanted to say, he replied in a sarcastic tone: “I’m happy for you. I’m happy for myself too.”

Indiyah clapped back: “Absolutely,” and then told him: “may the best heartbreaker win.”

Love Island continues tonight at 9pm on ITV2 and ITV Hub. Episodes are available the following morning on BritBox Indiyah was not impressed with Dami playing around And Indiyah camed bacl from Casa Amor with Deji

Coronation Street’s Simon Gregson is giving away his classic car and motorbike to NHS...