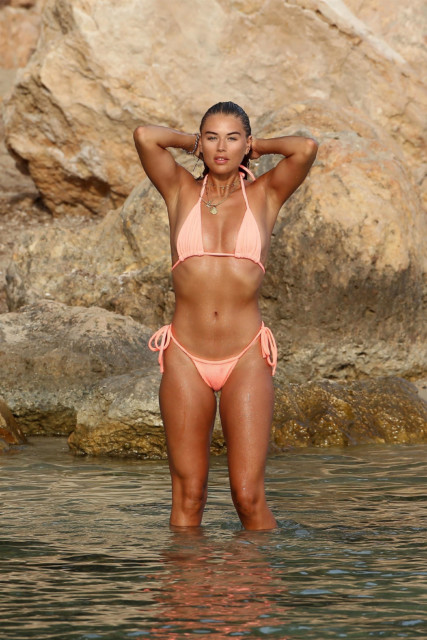 MODEL Arabella Chi makes a bit of a splash as she raises the temperature and the heart rates of her admirers in sunny Ibiza.

The reality star, 29, showed of her bronzed figure in a skimpy bikini.

The Love Islander showed off her amazing figure

The pink two-piece was designed by women’s fashion brand PrettyLittleThing.

The former Love Islander, who appeared on season five of the reality show, posted the sizzling snaps to her social media account.

Posting to her followers, the blonde beauty captioned one image on her Instagram with: “Golden Gal.

“If only I could live in bikinis everyday. @prettylittlething.” Arabella posed in a PLT bikini

It’s understood their six-year age gap played a part in the breakup. The reality star shared this cheeky snap on her Instagram Coronation Street stars warn Leanne Battersby will have Christmas from hell as she grieves...

Illegal migrants crossing the Channel will be sent to Rwanda – and told they...

Tesco doubles price of plastic bags to 20p in bid to get more shoppers...