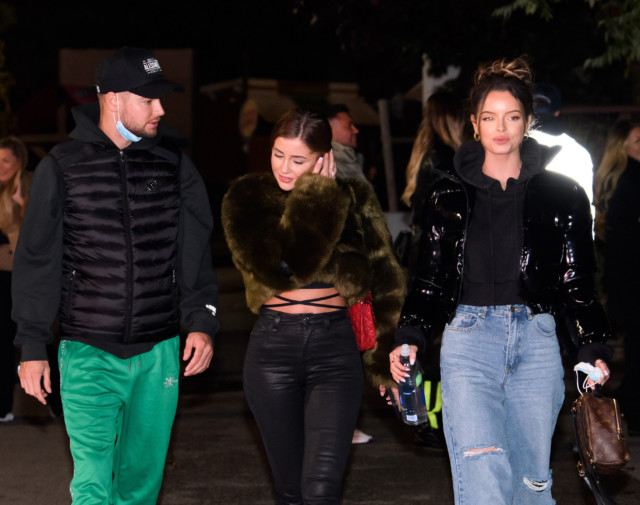 The pair, who appeared to avoid each other all night, were at the Surrey theme park’s first Fright Night of the year.

They were joined by Love Island Paige Turley and Finn Tapp, who kissed on the red carpet – which Maura managed to swerve.

Curtis, 24, didn’t, flashing a huge smile for photographers as he turned up in a colourful T-shirt and a fleece.

Maura, 29, was seen walking through the park in baggy trousers and a shiny jacket holding a bottle of water.

She was photographed alongside Love Island 2017 star Chris Hughes and Georgia Steel and queued for rides together. She was seen smiling alongside pal Georgia Steel last night

Her ex Curtis Pritchard also turned up at the spooky event Chris filmed her as they waited for one roller coaster, saying: “You all right Maura?” with the star poking her tongue out.

There were also a number of Love Island couples, with Siannise Fudge and Luke Trotman appearing in matching tracksuits.

Callum Jones and Molly Smith also turned up in beanie hats, managing to avoid his ex Shaughna Phillips, who was also at the park. Maura and Curtis – who was at the park with his Strictly star brother AJ and his girlfriend Abbie Quinnen – appeared on the most recent summer series of Love Island in 2019.

Paige and Finn appeared on this year’s first winter series, alongside Siannise and Luke T and twins Eve and Jess Gale.

‘Sad’ Royal Family appeals to the public to stay away from Prince Philip’s funeral...

New PS5 stock available NOW at BT and EE – but only for existing...