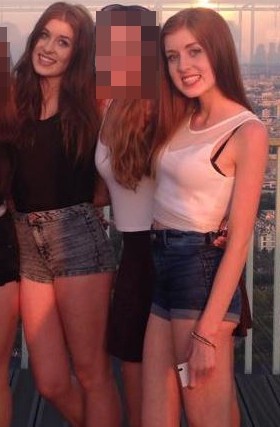 LOVE Island twins Eve and Jess Gale had a huge makeover before the show – because they looked very different as redheads in old snaps.

The glam pair, who were revealed as part of the show’s winter line-up last night, are unrecognisable in throwback pictures.

They are seen smiling in vest tops in the days before they discovered blonde hair dye and fake tan.

The pair are seen posing in tiny denim shorts alongside a pal, whose identity we have kept hidden.

Eve and Jess are from Cambridge, but moved to London and until Love Island worked as waitresses at Embargo Republica on Chelsea’s famous King’s Road.

They both share a love of boxer Anthony Joshua but insisted they would never argue over a boy.

Jess explained: “Boys often say: ‘Right, I fancy you both, which one of you wants me?’

“Some boys will be messaging me and Jessica at the same time, I don’t think they think we talk!

“But weve got so much respect for each other, were not going to argue over a boy.”

It was revealed last night that Eve once messaged Kylie Jenner’s ex Tyga to try to meet up for a “fling” in Ibiza.

She explained: “We were both at an event and I posted an Instagram story tagging him. He then messaged me afterwards and we spoke on WhatsApp.”

They are among the initial line-up for Love Island that was revealed last night, alongside Rochelle Humes’ lookalike sister Sophie Piper, 21.

Jacqueline Jossa is all smiles on Christmas shopping trip with husband Dan Osborne and...

UK economy officially enters recession – how it will affect your finances