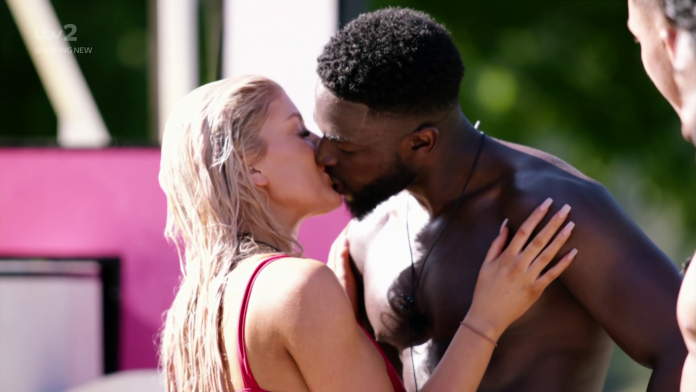 LOVE Island viewers are furious with Michael Boateng after it was revealed that his head is turned by the twins.
Two couples will be torn apart in Monday night’s episode of the ITV2 show, when bombshell twins Eve and Jess Gale get their claws into the lads.

Tonight, Leanne was the only girl to step forward for Mike – and he chose her to couple up with.

But the former copper, who is paired with Leanne, couldn’t contain his excitement when the twins walked in and he quizzed them on their type as the new Love Islanders sat around the fire pit.

He asked them: “So you go for the same kind of guys? What is your type?”

But they refused to be specific, even when Sophie Piper asked them to say one boy’s name each.

Sophie even commented: “Alright Michael, put your tongue back in your mouth!”

Later in the beach hut, Leanne said: “No one knows what those two girls want. Tomorrow is going to be a deadly night.”

Love Island’s teaser clip then showed Michael snogging the face of one of the twins – and Callum is their second target.

Later, Jess and Eve corner Callum for a chat on the sofas and ask him who he prefers out of the pair, before they appear to row over him.

Viewers were left raging over Michael betraying Leanne, as one said: “Michael has already made his choice, he cannot come and dump Leanne for one of the Bratz twin”

Another compared him to Michael Griffiths from last year and said: “Hope this isn’t like the other Mike (Michael)”

If Michael & Leanne separate, Mami Wata will come and destroy the whole of #LoveIsland

If Michael cheats on Leanne, he will not be part of this prestigious committee no more #loveisland pic.twitter.com/M0SDKfeaSP

LAst year, Michael dumped Amber Gill while she was away in Casa Amorfor new girlJoanna Chimonides – but once the later left, he tried to win Amber back.

In a shock move Michael opened up to to Amber and said it was always her he liked and not Joanna.

But he then got a taste of his own medicine when Amber picked newcomer Greg O’Shea over him, and the pair went on to win the show.

Don’t get into a festive frenzy and save money in the run up to...