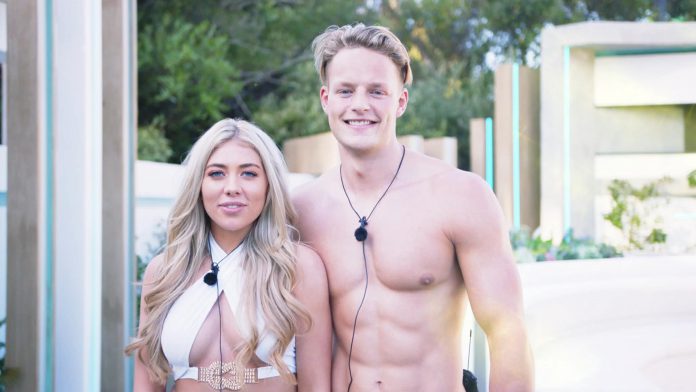 LOVE Island’s prospect of sun-soaked romance could soon be over for eloquent Ollie Williams and “gold-digger” Paige Turley, according to fans.

The ITV2 series kicked off in typically explosive fashion on Sunday, with the females tasked with choosing their male dates.

Fellow blondes Paige, who used to date pop sensation Lewis Capaldi, and Ollie, ended up paired with each other.

Yet viewers claim Ollie’s antics off-screen – as well as Paige’s treatment to the Someone You Loved singer during which she cheated on him with his best mate – could mean they are booted out of the Cape Town villa first.

Paige also got fans backs up when she initially said she wasn’t interested in the Londoner, yet made a swift U Turn when she realised he owned land and will one day become a Lord.

One irked viewer took to Twitter to write: “Really hope Paige and Ollie stay together so we can kill two birds with one stone when we can vote them out #LoveIsland #LoveIslandUK #loveisland2020.”

Another put: “So Paige cheated on Lewis Capaldi with his best mate, but says its a red flag that Ollie cheated on his first girlfriend…”

One then uploaded a smiling GIF with the words: “us when Paige and Ollie get voted off first,” suggesting they would be very happy for the pair to be evicted.

A Love Island loyal quipped: “Ollie and Paige are coupled up you say? We can get rid of both of them in one vote you say?”

A Twitter user concluded: “can we all agree to make sure Ollie and Paige get voted off first.”

One then surmised: “I will be so disappointed in the nation if they dont vote Ollie the trophy hunter off and Paige, the girl who broke Lewis Capaldi heart. AKA a national treasure.”

Fans have also cited a short time-span on the show for the pair, due to a “curse” for blonde contestants, who typically don’t last long on the matchmaking series.

Ollie was also on a back foot before the winter series began, after he was dubbed a “bloodthirsty” hunter when images showing him posing by an array of dead animals came to light.