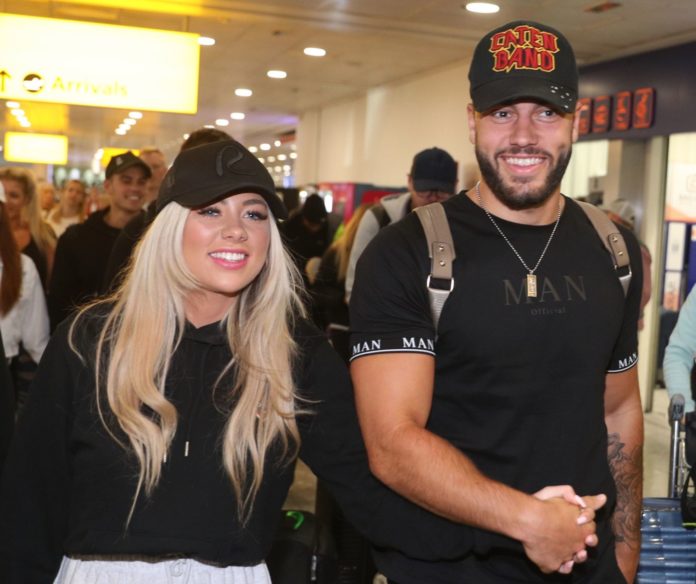 THEY arrived back in the UK this morning following a 15 hour journey, so it’s no surprise Paige Turley and Finley Tapp headed straight to their hotel.

The Love Island winners were no doubt exhausted after jetting in from South Africa, and were probably keen for some much-needed alone time.

However, that didn’t stop 20-year-old Finn from giving his followers a glimpse into their antics once they arrived in the capital.

Taking to his Instagram story, the recruitment consultant posted a photo of Paige, 22, crashed out on their hotel bed.

Finn, who officially asked the Scottish singer to be his girlfriend on the show, captioned the post: “Paigey Baby takes London.”

Dressed in a pair of grey jogging bottoms, a hoody and a black cap, Paige looked delighted to be holed up in a luxury hotel with her man.

Balloons spelling the word ‘love’ were laid out on the duvet and no doubt the pair will have a lot of fun now that there’s no cameras watching them.

However, Finn has hinted that they’ve already done more than kissing and cuddling and they did so whilst in the villa.

Admitting their rule to not have sex on camera proved difficult, he said: “You go in there and you think, Im not going to do it, all of this, all of that, but then youre living 24/7 having genuine solid, feelings for someone and are really attracted to them! And some of them bikinis phwoar!”

But Paige quickly shut him down and said: “My dads going to read this, shut up!”

The blonde star then added: “Being in there and sharing a bed for so long and having genuine feelings, its hard to fight them.”

The pair became the sixth couple to win Love Island and the first to win the winter edition of the show, and as they touched down in the UK today, reality had probably started setting in.

>But the cute couple were all smiles as they help hands and kissed whilst making their way through Heathrow Airport.

They were joined by runners-up Siannise Fudge and Luke Trotman, third-placers Luke Mabbott and Demi Jones, and Ched Uzor and Jess Gale – who also couldnt keep their hands off each other.

Despite only knowing each other for just over a month and being an official couple for a number of weeks, Paige and Finn recently discussed their plans for the future, which include getting a dog and moving in together.

Paige said: “I totally love Scotland. Ive never had a reason to move away from it. I think Glasgow might be a bit rough for Finn. Theyd eat him alive! Ha ha! Im joking.

“I think it would be a bit unfair of me to take him away from his comforts,” Paige said.

Finn continued: “Likewise. Its a bit of a middle ground. And Callums sold us the dream of Manchester.”

Lib Dem leader Jo Swinson insists she will NOT quit if she loses MPs...