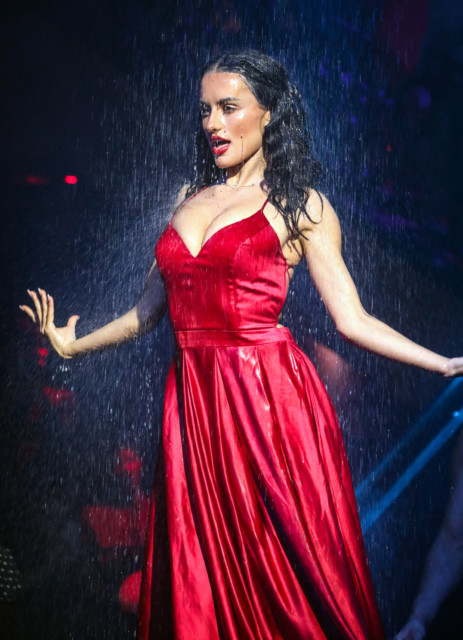 LOVE Island beauty Amber Davies gets drenched as she returns to the stage — but proves she’s definitely not wet behind the ears.

The reality star-turned-actress, 25, was left soaking as she performed as part of Cabaret All Stars at Proud Embankment, in central London.

Amber Davies got drenched as she returned to the stage in Cabaret All Stars at Proud Embankment, in central LondonAmber is the latest star to land a run of shows at the central London venue

From next month actress Claire Sweeney will also head-up a series of evenings.

Amber recently finished a stint in the West End as part of Dolly Parton musical 9 To 5.

Earlier this month Amber told HOAR that she had quit booze and is buying a house with her new boyfriend Nick Kyriacou. I quit booze and my boyfriend loves me more for it, says Love Island’s Amber Amber even said she has begged her businessman beau to propose and is “so excited” to start the next chapter in her life.

The loved-up couple, who were introduced by a mutual friend in 2020, have just returned from the Maldives, in the Indian Ocean, where Amber kept asking Nick, 29, if he was going to propose.

She revealed: “We had a few teething problems at the start of our relationship, but who doesn’t?

“He’s so driven, so hardworking. He has got me on the best track of my life and wants me to be the best version of myself.

“He’s also so hot! He’s my future baby daddy. I was asking him every single day on holiday if he was going to propose. “We’re buying a property in Surrey, so I’m moving from Essex.

“It’s all happening for me. I feel like I’m in a transitional stage in my life and I’m so excited.” Boris Johnson doubles down on Archbishop of Canterbury attack & says Rwanda policy is...

Kate Middleton reveals she felt lonely and suffers from mum guilt being both a...