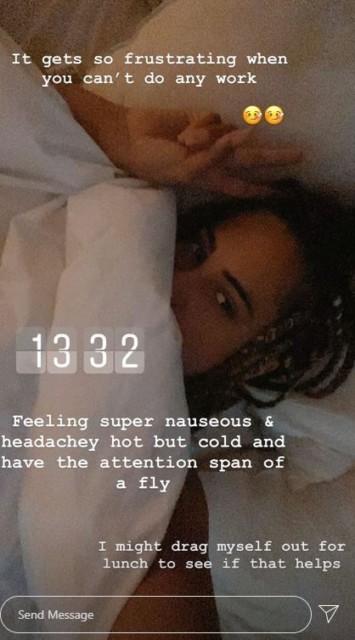 LOVE Island’s Amber Gill hit back at trolls accusing her of having coronavirus after she fell ill following her Ibiza holiday.

The 22-year-old star told critics to “go f**k yourself” as she confirmed that she’d already been tested for COVID-19 – and it’d been negative.

The reality TV champ horrified fans when she said that she “might drag herself out” as she shared a photo of herself ill in bed while listing her symptoms.

In the photo, Amber is flashing a peace sign with her duvet pulled up to cover half her face at 1.30pm in the afternoon.

She wrote: “It gets so frustrating when you can’t do any work.

“Feeling super nauseous and headachey, hot but cold, and have the attention span of a fly. “I might drag myself out for lunch to see if that helps.”

She quickly followed up with a sassy video, where she rolled her eyes at trolls who’d messaged her to self-isolate as she could have deadly coronavirus.

The beauty explained: “I literally forget daily how many losers I have on here. Amber recently got back from a trip to Ibiza “It’s not f**king corona, I’ve been tested for corona. Thanks for your input though, go f**k yourself.”

Amber jetted off to Ibiza with some of her Love Island pals earlier this month, but returned before the government introduced new rules that force Brits to self-isolate for 14 days once they come back from mainland Spain or one of its surrounding islands. The Government removed Spain from the safe list of countries on Saturday 25 July, and said anyone returning would have to stay home for a fortnight or risk a £1,000 fine.

Holidaymakers will be told to give an address to officials at the border – and face a £1,000 fine if they break it to go to work or to get food shopping.

Brits have been advised against all but essential travel to mainland Spain thanks to a spike in infections.

Foreign Secretary Dominic Raab admitted that more countries could be removed from the travel safe list at short notice – risking quarantine on their return.

Queen’s servants working three-week shifts away from their families to keep monarch, 94, safe...